In honor of Black History Month in the U.S., our Goldman Sachs Black Network sponsored a series of events underlining the power of the Black community and amplifying Black voices through discussions on equity, activism and lived experiences. The firm also launched initiatives throughout the month to contribute to racial equity advancement in the workplace, our local communities and beyond.

We share these highlights, not only to recognize our people’s commitment around the world, but to also share examples of important conversations and ideas that could lead to meaningful change:

The Network invited colleagues to connect creatively through their “Our Voices” video project – a unique way for our people to share their thoughts and perspectives on how the power of education, listening, advocacy, and action can help make progress toward racial equity. 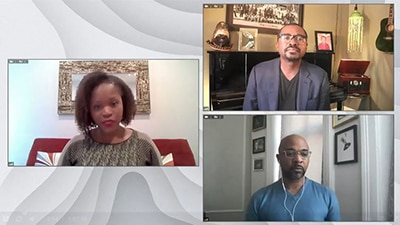 In partnership with Private Wealth Management, the Network hosted a conversation with Alvin Ailey American Dance Theater Artistic Director Robert Battle and Associate Artistic Director Matthew Rushing to discuss the theater's focus on enriching American modern dance heritage and preserving the Black cultural experience. The discussion also explored how Ailey's signature work, Revelations, influenced the theater's newest ballet, Testament, which was shown in a special screening at the end of the session.


Social Entrepreneurship, Diversity and Access to Capital: A Conversation With BlocPower and Echoing Green

Donnel Baird, founder and chief executive officer of BlocPower, an energy tech startup increasing sustainability in cities, and Cheryl Dorsey, president of Echoing Green, a global nonprofit organization that provides seed funding to social entrepreneurs, discussed the importance of the triple bottom line in 21st century business models and expanding economic opportunities and access to capital for diverse entrepreneurs. The conversation was moderated by Margaret Anadu, global head of sustainability and impact for Asset Management and chairwoman of the Urban Investment Group – our investing and lending business deploying over $1 billion annually in community and economic development through real estate projects, social enterprises, and lending facilities for small businesses. During the discussion, Dorsey commented: “In many ways, the pandemic and the social reckoning stemmed from the murder of Mr. George Floyd created a space to think about how we are going to address this. We are at the beginning of the journey. You can’t continue without responsibility, accountability and reckoning with the truth.”


Intersectionality in Politics: A Discussion With Rep. Ritchie Torres (D-NY) 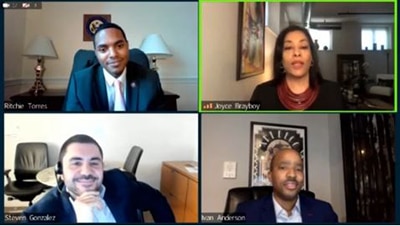 In partnership with the LGBTQ+ Network and the Hispanic/Latinx Network, the Black Network hosted a conversation on intersectionality in politics. In a discussion moderated by Joyce Brayboy, managing director in the Office of Government Affairs, Rep. Ritchie Torres (D-NY), the first openly gay Afro Latino elected to Congress, discussed how he has advanced the dialogue around the importance of authenticity and intersectionality throughout his tenure in politics. “Keep doing what you are doing. Representation is both a blessing and a burden, because when you are the first you journey without a role model… but it is needed. Blaze the trail, reshape the norms of the institutions to which you belong,” he remarked.


Health Equity and the Black Community

The Black community has historically faced disparities in access to healthcare, an issue that has been amplified during the pandemic. Our people were invited to a panel discussion on health-related problems that disproportionately impact at-risk groups, hosted by Dr. Lynne Richardson and Dr. Carol Horowitz from the Mount Sinai Institute for Health Equity Research.


Talks at GS: A Conversation With the Innocence Project's Christina Swarns

The Innocence Project, a Goldman Sachs Fund for Racial Equity grantee, works to exonerate wrongly convicted individuals and pursue criminal justice system reform. In a conversation moderated by Asahi Pompey, global head of Corporate Engagement, Christina Swarns, the executive director of the Innocence Project, discussed the organization’s work to secure the freedom of innocent individuals and focus on implementing structural reforms to prevent wrongful convictions. They were joined by Huwe Burton, a former client of the Innocence Project, who shared his experience on being wrongfully convicted as a teenager and subsequently proven innocent and exonerated. 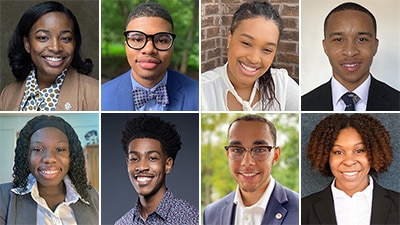 Through our Matching Gift Program, our people were invited to donate to this year’s BHM-featured nonprofit organization, the Greatest Stories Never Told (GSNT). GSNT is dedicated to recognizing the untold historical legacy of minority and women heroes in science, technology, engineering and math. Most recently, GSNT published Sprouting Wings, a children’s book that tells the story of James Herman Banning, the first Black pilot to fly across the US. Colleagues’ donations of $25 and under (or USD equivalent) were matched three-to-one, and donations above $25 were matched dollar for dollar.

Finally, we recently announced a new five-year $25 million commitment to Historically Black Colleges and Universities (HBCUs), which is tied to the Market Madness: HBCU Possibilities Program, a four-month program preparing students for a final case study competition, “Market Madness.” This commitment builds on the Goldman Sachs Fund for Racial Equity, which the firm announced in June 2020 to support the vital work of leading organizations addressing racial injustice, structural inequity and economic disparity.


The work continues. Learn more about how we’re investing in the power of Black communities and businesses, and an inclusive workforce.