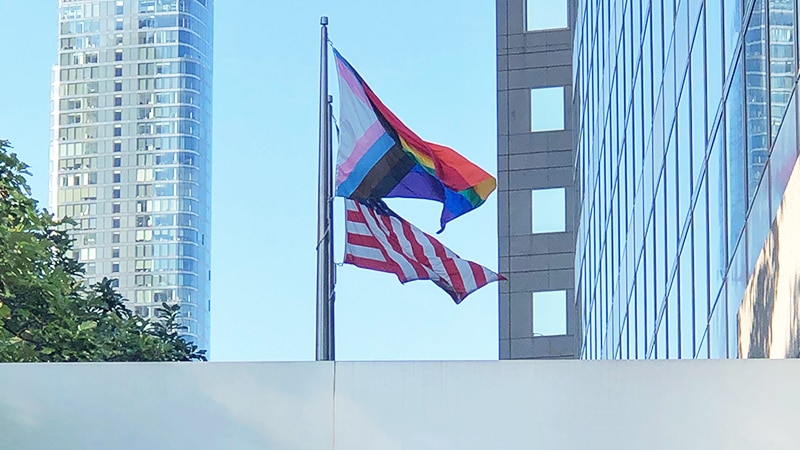 In recognition of Pride Month, Goldman Sachs invited colleagues around the world to a series of events aimed at recognizing and celebrating the lives and contributions of the LGBTQ+ community, while also encouraging allyship to welcoming a diverse society.

Pride Month has been celebrated in June in the Americas and EMEA for over fifty years as the result of the hard work of LGBTQ+ pioneers, including black and transgender women. Check out some of the ways we recognized and celebrated this powerful legacy across our offices in the Americas, EMEA, and APAC:

Celebrating Pride in our Richardson office

2021 Pride Month Opening Celebration: Trivia Night
In recognition of the important milestones celebrated during Pride Month, we hosted a virtual trivia night that was held across the Americas and EMEA. At the end of the month, the winning teams from both regions got a chance to compete against each other.


Perspectives on Recent LGBTQ+ Legislation
Our people joined a conversation with Alphonso David, president of the Human Rights Campaign (HRC), who discussed the unprecedented number of bills targeting transgender people and youth that have been introduced in state legislatures this year, intersectionality in the LGBTQ+ community, and the work of the HRC. The discussion was moderated by Michael Paese, global co-head of the Office of Government Affairs and regional head of the Americas LGBTQ+ Network.


Proudly Resilient Summit: A Conversation with David Solomon
The Proudly Resilient Summit was a month-long virtual event aimed to connect, amplify and raise funds for more than 40 different LGBTQ+ organizations from around the world. Our CEO, David Solomon, shared his perspectives on advancing inclusion and diversity at the firm and within the communities we serve. Goldman Sachs is a longstanding partner of Out Leadership and has been working closely with the organization for the last year to improve LGBTQ+ diversity on corporate boards via its Quorum talent initiative.


“Out in the Open” Sessions
Hosted by Goldman Sachs University, this program provided insights into the experiences of LGBTQ+ professionals at the firm and explored what it means to be an ally. These interactive sessions were conducted over Zoom. 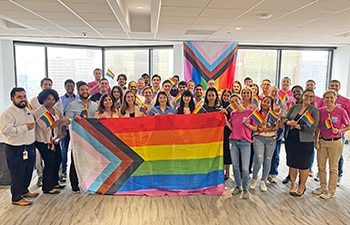 Celebrating Pride in our Dallas office

Pride in Action: Champions for Change in North Texas
The Dallas LBGTQ+ Pride Network hosted leaders from local non-profits in the North-Texas region for a panel on ongoing community efforts toward greater progress. The organizations included Jonathan’s Place, the Resource Center, and the Black Trans Advocacy Coalition. These NGOs shared the unique ways they are engaging the community, from providing adoption and homelessness services to LGBTQ+ youth, to food pantries and meals-on-the go, to gender diverse career fairs and more. The event was a reminder that despite the recent advances in LGBTQ+ rights, there is still much progress to be made. Texas remains a civil rights frontier, with numerous efforts to increase safety for BIPOC Trans people. In Healthcare, without the Equality Act, insurance companies can refuse coverage to transgender patients. But as our wonderful panelist Leslie McMurray reminded us, “prejudice rarely survives experience.” This panel was moderated by Chad Wallace, global head of Digital Experiences for Transaction Banking.


Fireside Chat with Nicola Adams OBE
In collaboration with the EMEA Firmwide Black Network, our people participated in another fireside chat with Nicola Adams OBE. Nicola is a former professional boxer, LGBTQ+ Olympic gold medalist, and part of the first same-sex couple on the UK television dance contest Strictly Come Dancing. Moderated by Darren Allaway, managing director in Goldman Sachs Apex and MD Ally, we welcomed Nicola to talk about her experiences as a queer, Black woman in elite sports, and to discuss intersectional activism and allyship.


Parents Panel Discussion: LGBTQ+ Next Generation
Mikhail Zlotnik, head of EMEA Equities One Delta and Prime Financing Trading, and co-head of the EMEA LGBTQ+ Network, moderated a powerful conversation at our “Parents Panel Discussion: LGBTQ+ Next Generation” event on how to talk with children and young people about LGBTQ+ topics. Sarah Gray, chief risk officer for the Global Markets Division and MD Ally, shared her perspectives as a parent of an LGBTQ+ child, alongside Tuvia Borok, global head of the Trading Documentation Group, who provided insight into being a gay parent and his non-profit organization, the P3 Network, a parenting network to support LGBTQ+ parenting and education. We were also joined by Chay Brown, senior programs officer in the Education and Youth team at Stonewall, who shared best practices and advice on how to discuss LGBTQ+ issues with children.


In Conversation with Tan France
To conclude EMEA’s Pride Month Events, the firm hosted an important chat with Tan France, a fashion designer, television personality and author, known as a member of the ‘Fab Five’ in the series Queer Eye. Moderated by Liz Martin, Equities Partner in the Global Markets Division and MD Ally, we discussed Tan’s experience as one of the first publicly out Muslim gay men on Western television, his experiences with colorism and racism in Britain, and his move to the U.S. 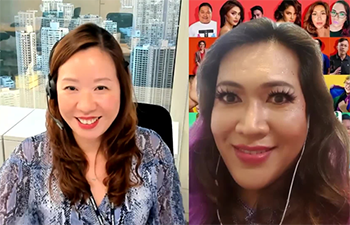 Exploring Intersectionality: How Overlapping Identities Shape Women's Experiences in the Workplace and Beyond
In APAC, our people were invited to a discussion with Dr. Brenda Rodriquez Alegre, a trans-activist and lecturer in the Gender Studies Program at The University of Hong Kong. This event was a collaboration between the Hong Kong LGBTQ+ Network and the Hong Kong Women’s Network. During the session, Dr. Alegre shared her personal experiences and offered intersectional perspectives on women and how one’s social and political identities (such as ethnicity, sexual orientation, and gender identity) combined, could impact their experiences in the workplace and daily life. She recounted that workplace inclusion has come a long way in the last 20 years, and allyship is an instrumental part of the efforts driving inclusion. She also stressed the importance of having “self-awareness” as it is essential in combating discrimination and macro aggression. The conversation was moderated by Tin Hsien Tan, global co-head of Investment Banking Division Compliance.