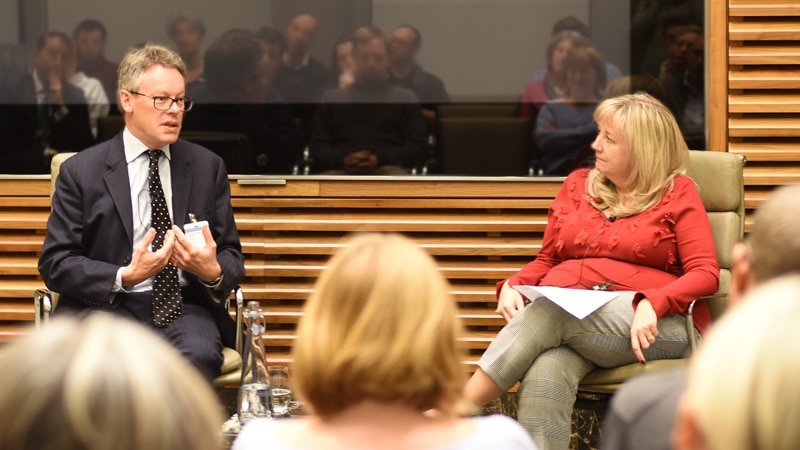 Since 2014, Dermot has sought to preserve the legacy of Bletchley Park, the home of World War II code breakers and a birthplace of computing, as well as engage in educational outreach.

“We are partnering with Goldman Sachs on a program to introduce school children to science, technology, engineering and math subjects, and use some of the exciting spy stories associated with Bletchley Park and code breaking to engage them in disciplines they may not have thought about,” he said.  While schools visit the Bletchley Park site daily, Goldman Sachs has also funded a teacher who takes the Enigma machine out into underprivileged, hard-to-reach areas to educate children in exciting and interactive ways.

Dermot, who is the author of Prof: Alan Turing Decoded, which was published in 2015, also spoke about his uncle’s work beyond breaking the Nazi Enigma code. After World War II, Alan Turing shifted his focus from code breaking, computer design and smart computing to using computers to predict the coat pattern of Friesian cows and studying the spiral, clockwise and anticlockwise pattern of a pine cone.

Dermot also dispelled the myth that his uncle was solitary, friendless and difficult, noting that Alan Turing had a great sense of humor and enjoyed time in the pub playing chess while talking about programming machines such as the Colossus.

Jo Hannaford, head of the Technology Division in EMEA and a Bletchley Park trustee, moderated the discussion.