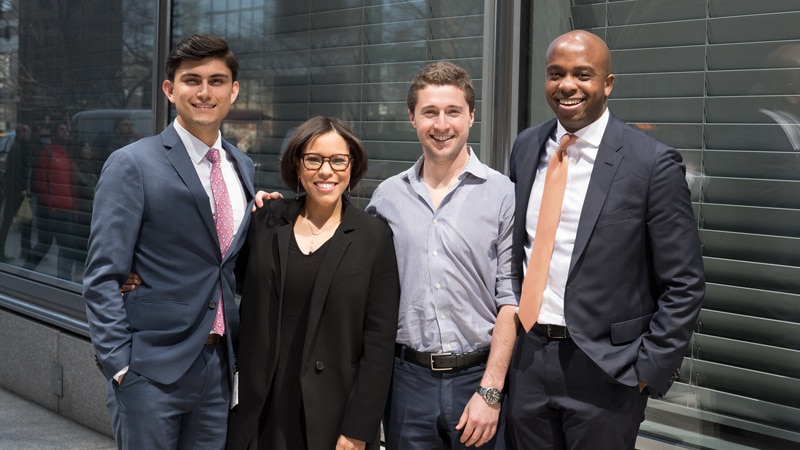 Colleagues who as analysts participated in the firm’s inaugural Analyst Impact Fund have started a young professionals committee for the organization they sought to help during the competition. Now, they’re actively involved through the committee in helping the organization, STRIVE International, with fundraising and other initiatives.

“We learned about STRIVE while searching for an organization to support and were truly inspired by its impact in helping individuals with significant barriers to employment retain and advance in their jobs,” said Krystle, an analyst in the Legal Department. Harlem-based STRIVE and its affiliates have helped more than 50,000 individuals, including the long-term unemployed, the formerly incarcerated, disconnected youth, recovering addicts, public assistance recipients, veterans, the homeless and the working poor, enter the workforce since its founding in 1984.

“After the Analyst Impact Fund competition, I really wanted to get more involved with the organization,  and learned that STRIVE didn’t have a Young Professionals Committee (YPC)—so I volunteered to organize one,” said Krystle.

“To me, the fact that we connected through philanthropy and volunteering really speaks to the power of the Goldman Sachs network,” said Stephen.

The YPC aims to generate support for STRIVE’s programs through fundraising, networking and volunteer opportunities for its members. It has hosted a networking event that introduced more than 60 young professionals to the organization, as well as a resume review and mock-interview session for STRIVE graduates who are looking to advance in their current positions.

“As junior professionals, it can be tempting to think that we don’t have much to contribute [to a nonprofit] because we’re just starting our careers,” Nigel said. “But the STRIVE students and graduates have told us how much they value our insights, and I think it is a testament to the firm’s culture of giving back and sharing its thought leadership and skills.”