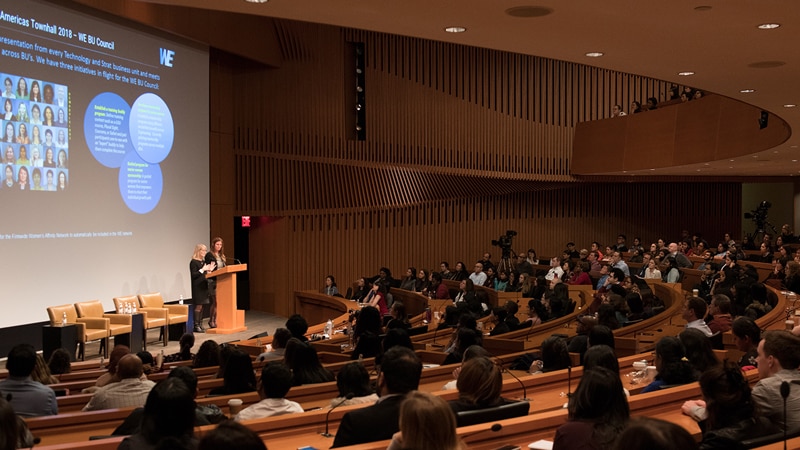 Goldman Sachs engineers recently gathered in New York, Salt Lake City and Dallas for the first-ever Women in Engineering (WE) Day at Goldman Sachs. The event celebrated the accomplishments of women engineers across the firm, and highlighted careers - and the state of diversity - in the coding world.

Inna, a vice president in Technology, said: “I've been with Goldman Sachs for 14 years and continue to be amazed by the constant change in technology and the number of ideas and new initiatives that are being generated and led by Goldman folks. By listening to the women speak at today's event, I realized how passionate we are about our work. Only those individuals who believe in what they do can do it well and be successful in their careers.”

The event featured a series of “WE Talks,” short-form chats modeled after TED Talks, during which Goldman Sachs women engineers discussed how they work with their teams to increase the resiliency of the firm's platforms, decrease operational risk and provide a better client experience.

Speakers from across Engineering described innovations in several areas, including how to manage portfolio risk; recent updates to Marquee, the digital platform that allows clients to access content, data and analytics via application program interfaces; quality assurance when managing thousands of applications across divisions; and the continued expansion of Marcus by Goldman Sachs, designed to help customers manage their finances.

The state of diversity in the coding world was also in focus during the conference.

During a panel discussion, Sheba, a vice president in the Securities Division, highlighted the importance of recruiting talented individuals representing a range of backgrounds and bringing diverse perspectives to the table.

“I am an Iranian-American, with a master’s degree in Social Anthropology and a film studies background. It’s because the firm didn’t hire someone who fit the typical profile of a technical analyst, that I’ve contributed a unique perspective to become a leader in my field.”

Liz Byrnes and Laura Takacs, co-heads of the Women in Engineering affinity network in the Americas, spoke about the steps the firm is taking to combat the obstacles preventing more women from entering roles in science, technology, engineering and math (STEM). Through partnerships with organizations such as Girls Who Code and Columbia Girls in STEM, the network is committed to reversing the downtrend in the number of female computer scientists.

This summer, all of the women interns in Engineering were paired with a mentor to help them navigate their time at Goldman Sachs and learn about careers in the industry. Focusing on mentorship, Laura said, is a key pillar of the Women in Engineering affinity network's mission and important to the efforts of encouraging women to remain in STEM.