“Many people think of Goldman Sachs as an investment bank. But it’s also a tech company at heart.”

A recruiter contacted me for an engineering role at Goldman Sachs. At the time, I was a Java developer for financial software and wasn’t actively looking for a new position. Though I was aware of Goldman, I thought of it as an investment bank, not a tech company. Then as I spoke more with the firm’s engineering teams, I became excited about how much Goldman does in the realm of technology. The opportunity seemed like a great way to move forward in my career, and a chance to dive in to big data – something I’ve always been interested in. 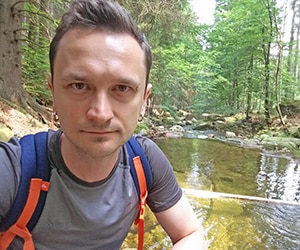 As a Polish-speaking engineer, I found it easy to onboard with the firm. When I joined, our Warsaw office had just opened, so it was chance to help build a team from the ground up. It had the feel of a start-up, but with the support and resources of a global firm. From day one, I could log in and get started on projects. It was also my first time using English as my primary language at work, but the adjustment was quicker than I expected. I immersed myself, and the practice paid off.

In my role, I manage big data in data lakes. As the tech lead in the Warsaw office, I choose and design the apps we use to track and report transactions. It’s an interesting challenge because we need to report millions of transactions to different regulators at different times. I’ve enjoyed becoming an expert at processing high volumes by strict deadlines.

Engineering students might find an unexpected fit in finance. For those in computer science, a career in investment banking might not be top of mind. But if you’re interested in big data and data lakes, Goldman Sachs might be a great place to put your skills to practical use. As examples, my team uses tools like Apache Spark, Scala, and Apache Flink to write apps that elegantly manage an incredible amount of data.

The firm encourages you to build relationships on your team – and beyond. I find the working atmosphere to be quite collaborative and diverse. Day to day, I work closely with other engineers in the Warsaw office, sharing ideas and issues as they come up. When I first joined, networking was new to me, so it’s a skill I’ve had to cultivate. Now, I enjoy reaching out to people across the firm’s many offices, from London to Bangalore to New Jersey. My team is also quite diverse, so I’ve absorbed a fascinating spectrum of cultures, work styles, and perspectives.

When I’m not making apps, I’m often making music. Namely, heavy metal. I often jam out to covers of Metallica on my electric guitar – they’ve been my favorite band since high school. I also love getting out into nature, and fishing and hiking in particular. Sometimes, I can even coax my teenage daughter to go fishing with me. But usually only for an hour or two, until her cell phone battery is drained and it’s time to go back home.