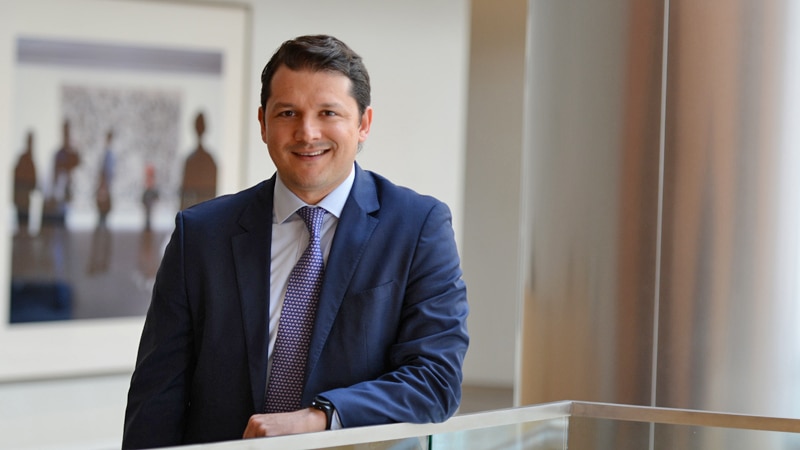 “We don't have much of a routine in investment banking—that's something I like about it. Every day you are doing something different, like helping draft a roadshow document so that a client can raise capital for growth, advising clients on their strategic options in a hostile takeover situation, or advising a company in an acquisition.”

I work in the Investment Banking Division's Financial Institutions Group, FIG, where we have five sub-sectors: banks, insurance, asset managers, financial technology, and specialty finance. I spend most of my time covering insurance companies in the US, and within Latin America, I focus mostly on Brazil and Chile, where we advise clients on transactions and general corporate finance matters. In Latin America I work across all FIG sub-sectors.

I was born in San Jose, California, but I grew up in Brazil and went to high school and undergrad in Brazil. During college, I was an athlete, juggling college and soccer—I actually played soccer professionally for about four years. In Brazil you can go to college at night, so for my first three years in college I practiced in the mornings and afternoons and then went to college at night.

My undergrad was in economics; I've always liked to read about financial markets, even back in the day when I thought I was going to play soccer for a long time. I did an internship during my last year in college in the financial department of a large multinational company. After graduating, I joined a bank in Sao Paulo in their M&A group. After almost 5 years, I decided to return to the United States to study at Columbia Business School for my MBA. In 2011, I was a summer associate at Goldman Sachs in FIG.

We don't have much of a routine in investment banking—that's something that I like about it. Every day you are doing something different, like helping draft a roadshow document so that a client can raise capital for growth, advising clients on their strategic options in a hostile takeover situation, or advising a company in an acquisition. We also think strategically about clients' businesses and try to propose transactions that fit their strategies.

Teamwork is essential in team sports. It doesn't work if everybody's not going the same direction. Working in banking is similar—you work in teams, understanding that you have a role—an important role—but you're part of a bigger effort. To make things work, you've got to be able to cooperate. It's important to work well with the analysts and senior bankers on the team. An essential part of my role is to coordinate all the different moving parts of a project and keep everyone updated with the most accurate information.

With my job I travel a lot. Last year between March and April, I spent five weeks in Brazil, and at the beginning of this year, I spent a lot of time in Chile in another transaction that we were working on.

I have a two-year-old, so I try to be with my family as much as I can. The firm has a great technology infrastructure which allows us to work from home as efficiently as if we were at our desks at work. I like having this flexibility.

When I started at Goldman Sachs, it was my first time working in a professional environment outside my home country and not using my native language. It turns out it was really easy for me to integrate with everyone in the group. I have FIG colleagues in New York from all over the world—in fact it's a very diverse group. On top of that, the teamwork culture within Goldman Sachs positively surprised me. Teams from different groups and geographies work so well together. I could see the quality of the people and it confirmed for me that when you come here, you work with really smart people who value teamwork.