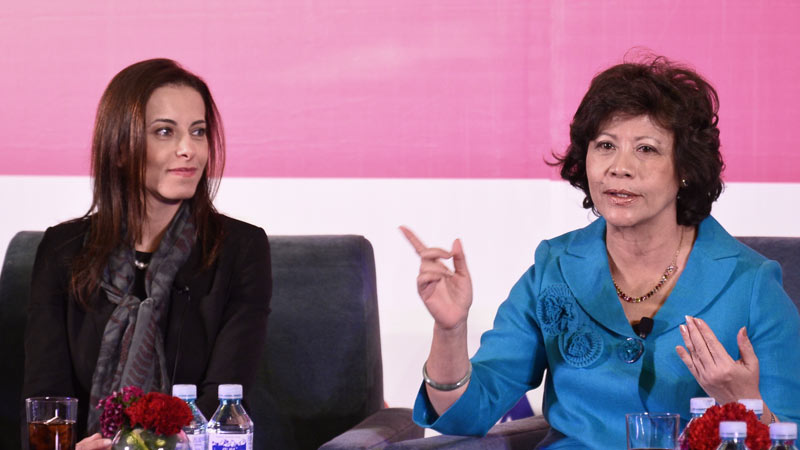 Dina Habib Powell, President of the Goldman Sachs Foundation, left, and Dr. Noeleen Heyzer, United Nations Under-Secretary-General and Executive Secretary of ESCAP, at the opening of the Regional Forum.

Held in China’s capital, the Regional Forum on Creating an Enabling Environment for Women’s Economic Empowerment through Entrepreneurship in Asia and the Pacific examined key trends and obstacles, and in particular, culled findings from in-depth research on socio-cultural and policy environments in China, India, Indonesia and Malaysia.

Organized by the United Nations Economic and Social Commission for Asia and the Pacific (ESCAP) in cooperation with the All-China Women’s Federation (ACWF), and in partnership with Goldman Sachs 10,000 Women, the Regional Forum was attended by government officials, business leaders, academics and civil society organizations.

Asia and the Pacific will remain the fastest growing region globally and an anchor of stability in the world economy. Yet, output per worker could be 7 to 18 percent higher across a range of countries if female entrepreneurs and workers were to work in the same sectors, types of jobs, activities as men, and have the same access to productive resources. Restricting job opportunities for women in Asia and Pacific countries is costing the region an estimated US $89 billion every year.

“Women in Asia-Pacific often bear the brunt of lingering poverty, and yet possess largely untapped potential as drivers of equitable and sustainable growth. Entrepreneurship provides a uniquely powerful means to harness that potential and advance gender equality through women’s economic empowerment,” said Dr. Noeleen Heyzer, United Nations Under-Secretary-General and Executive Secretary of ESCAP, at the opening of the Regional Forum..

A national consultation on women’s entrepreneurship in China concluded on 16 April. The consultation identified strategies and policies for enabling women to play a bigger role in enterprise development and the China’s economy.

“Entrepreneurial training will be instrumental in empowering individual women and improving economies, not only at the local level but nationally as well,” said Dina Habib Powell, President of the Goldman Sachs Foundation. “We are pleased to participate with our partners in this forum to help create a supportive, productive environment for women entrepreneurs.”

Dr. Heyzer also launched Asia-Pacific regional preparations for the commemoration of the 20th anniversary of the Beijing Platform for Action, adopted at the Fourth World Conference on Women in 1995. This visionary global agenda covers 12 critical areas of concern, including women’s economic participation.

The Regional Forum and national dialogues were organized as part of the regional programme to promote women’s economic participation and entrepreneurship in Asia and the Pacific, implemented by ESCAP, in partnership with Goldman Sachs 10,000 Women.