The following e-mails were sent to all Goldman Sachs people on Tuesday, September 6, announcing that Bentley de Beyer will become an advisory director and that Jacqueline Arthur has been appointed global head of Human Capital Management, effective January 2023.

Bentley de Beyer, global head of Human Capital Management (HCM) and a member of the Management Committee, will retire from the partnership at the end of this year and become an advisory director, effective in January 2023.

As global head of HCM, Bentley has served the firm with the utmost dedication and developed and implemented our people strategy over the past several years. He has led our efforts to evolve our approach to performance management, enhance succession planning and meaningfully advance our aspirational diversity goals, and helped create an environment where listening via regular pulse surveys, manager engagement and coaching became more ingrained in how we operate as a high-performance organization.

At the same time, Bentley partnered closely with us and leaders across the firm during the pandemic as we focused on ensuring that all of our people and their families received the support they needed, in line with our “people first” approach.

Bentley first joined the firm in 1999 in the Investment Banking Division in the Sydney office. He rejoined Goldman Sachs in early 2020 as a partner in HCM in New York.

Outside the firm, Bentley serves on the Board of Directors for The Trevor Project, a nonprofit whose mission is to end suicide among gay, lesbian, bisexual, transgender, queer and questioning young people.

We want to personally thank Bentley for his leadership and significant contributions to the firm throughout his tenure, as well as his unwavering commitment to our people. We look forward to benefitting from his continued counsel in his capacity as an advisory director.

We are pleased to announce that Jacqueline Arthur will become global head of Human Capital Management (HCM), effective January 1. In conjunction with her appointment, Jacqueline will become a member of the Management Committee.

As head of HCM, Jacqueline will build on her most recent responsibilities as chief operating and strategy officer of the division to continue enhancing and scaling our people strategy in line with the firm’s growth and commitment to excellence. In doing so, she will partner closely with senior leaders across divisions and regions to advance our efforts to invest in our people at every stage of their Goldman Sachs careers and support them in making a meaningful impact.

As we continue to focus on attracting, developing and retaining the talented and diverse individuals who help make the firm what it is today – and who contribute to what it will become as we work together on executing our strategy – Jacqueline will leverage her extensive knowledge of our businesses, culture and talent processes to enhance all aspects of the Goldman Sachs experience.

In her new capacity, Jacqueline will also join the Partnership Committee. She will continue to serve as a member of the Global Inclusion and Diversity Committee. 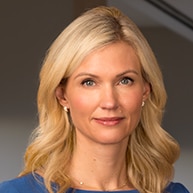 Jacqueline joined Goldman Sachs in 2007 and was named managing director in 2012 and partner in 2018.

Jacqueline will work with Bentley de Beyer over the coming months – and in his new capacity as an advisory director – to effect a smooth transition.

Please join us in congratulating Jacqueline on her new role, and in wishing her continued success.