NEW YORK, May 24, 2021 — The Board of Directors of The Goldman Sachs Group, Inc. (NYSE: GS) today announced the appointment of Kimberley D. Harris as an independent director of the firm, effective immediately.  Ms. Harris will also become a member of each of the firm’s Governance, Compensation and Public Responsibilities Committees. 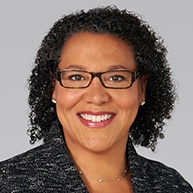 Prior to serving in her current roles, Ms. Harris was a partner at Davis Polk & Wardwell LLP, a global law firm, having joined Davis Polk as an associate in 1997.  From 2009 to 2010, Ms. Harris was Senior Counsel to the Assistant Attorney General, U.S. Department of Justice, Criminal Division and from 2010 to 2012, she served in the White House Counsel’s Office, including as principal Deputy Counsel and Deputy Assistant to the President from 2011 to 2012.

“We are excited to announce the addition of Kim to our Board.  Kim will further enhance the diversity of skills and experiences represented on our Board. She has proven to be a trusted advisor across a range of roles in the public and private sectors, making her well-positioned to provide advice and insight across a broad spectrum of topics, including governmental, regulatory and public policy matters,” said David M. Solomon, Chairman and Chief Executive Officer of Goldman Sachs.

“Kim is a leader in her field with a differentiated perspective gained from working in senior positions in both the public and private sectors, including the White House and her current roles at Comcast and NBCUniversal.  We look forward to benefitting from her seasoned judgment and her contributions to our Board across a wide range of topics,” said Adebayo O. Ogunlesi, Lead Director.


Goldman Sachs is a leading global financial institution that delivers a broad range of financial services across investment banking, securities, investment management and consumer banking to a large and diversified client base that includes corporations, financial institutions, governments and individuals. Founded in 1869, the firm is headquartered in New York and maintains offices in all major financial centers around the world.