At the turn of the twentieth century, a steady stream of immigrants and expanding railroads had transformed Boston, Massachusetts into a thriving industrial city. Wealthy Bostonians were investing in mines, railroads and industries in the American West. Chicago, Illinois was also booming; in 1900 it was the second-largest city in the United States. Bustling with industry and the construction of skyscrapers, the city had consolidated its position as the financial capital and railroad hub of the agro-industrial Midwest. 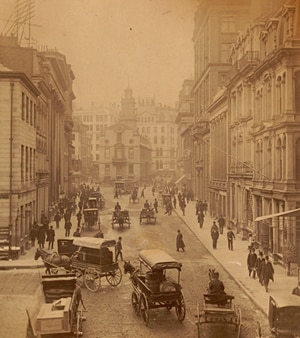 At the time, Boston was completing a transformation from a largely shipping and trade-oriented city to a manufacturing center, thanks in large part to the waves of hard-working Irish immigrants, who continued to cross the Atlantic and settle there. Its earlier days as New England’s premier shipping hub had made Boston a nucleus of significant wealth. Now, flush Bostonians looked to invest in industry and in the country’s growing railroad system.

As the American economy expanded westward, new financial innovations emerged to meet the practical realities of a more spread-out populace. For example, in the mid-1800s, financial derivatives such as forward and futures contracts came into existence as a way for Midwestern farmers to lock in prices on crops they stored in Chicago while waiting to transport them east or west via railroads and waterways. In 1900, the Chicago Butter and Egg Board was established as a clearinghouse for contracts related to these two products. In 1919, the Board would expand to include contracts on other commodities and be renamed the Chicago Mercantile Exchange (CME). 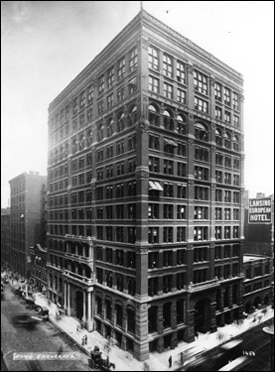 In 1900, Goldman Sachs established offices in these two regional financial centers, officially making the New York-headquartered firm a national company. The offices, at 60 State Street in Boston and 205 La Salle Street in Chicago, provided the firm with an on-the-ground presence in two important and growing markets in which Goldman Sachs saw opportunities to put its innovative financing expertise to work to meet growing needs.

With the establishment of its Boston and Chicago offices, Goldman Sachs was on its way to becoming a recognized leader in the banking industry on a national scale.