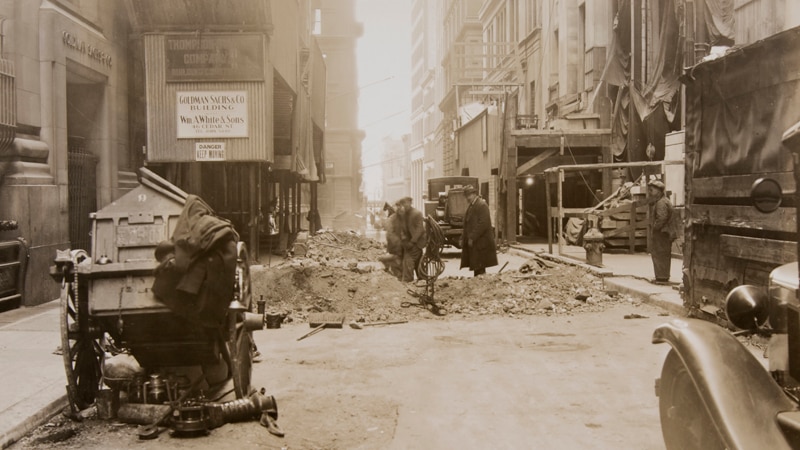 On January 12, 1929, Goldman Sachs announced that it would purchase the Hanover Fire Insurance Company Building at 34 and 36 Pine Street in lower Manhattan, just next door to its then-current offices at 30 and 32 Pine Street. The following year, the firm would erect a new, 20-story building in its place that would serve as its first headquarters and retain the address of 30 Pine Street.

At the time of the ambitious new building project, the Wall Street area was undergoing a transformation, with new construction booming and new buildings setting height records in the financial and insurance districts of the city.

Goldman Sachs contracted architect Archibald F. Gilbert to design its new home, described in one 1929 press clipping as a “New Banking Skyscraper” at an estimated cost of US$1.5 million. The location was significant: in 1869, when the firm was founded, Marcus Goldman’s office was located in a structure that stood on the site.

General banking offices occupied the lower floors, with the upper floors reserved for partners’ offices, dining rooms, and a fully equipped gymnasium, including a squash court. In the wake of the 1929 financial crash, even before the building’s completion, the firm leased several floors to other firms. To save costs, the squash court became the firm’s Investment Banking floor, where John L. Weinberg and John C. Whitehead, later senior partners, first worked.

Goldman Sachs would operate from 30 Pine Street until 1957, when it moved to 20 Broad Street. The building was demolished in the early 1960s to make way for the southern Chase Plaza, which opened in 1964. In the years and decades that followed, Goldman Sachs would maintain a strong presence in lower Manhattan, including its 85 Broad Street location, which became the firm’s headquarters in 1983, and its current home at 200 West Street.