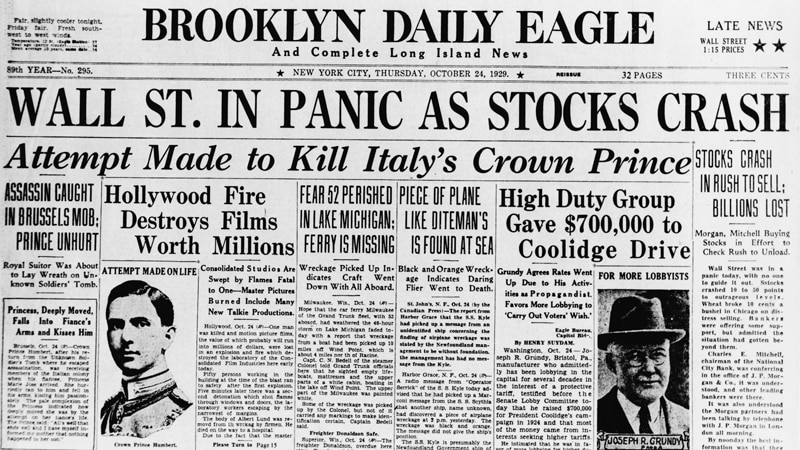 The “roaring twenties” end with the stock market crash of October 1929.

The “roaring twenties” began with a short-lived recession in the United States, social unrest and hyperinflations in Germany, Austria, and Russia. Disagreements on German reparations and inter-Allied war debts undermined international cooperation among Great Britain, France and the United States. Structural economic imbalances resulting from World War I and the restoration of the gold standard greatly increased the fragility of the international monetary and financial system.

US lending abroad dropped sharply after June 1928, as investors avidly purchased the stocks of utilities and high-tech firms, driving up the price of securities. Commercial banks, restricted from trading or purchasing equities, set up securities affiliates to enter investment banking and brokerage businesses.

Robust equity and debt markets further stimulated the belief that stock prices would only increase, setting the stage for a bubble. Financial intermediaries lent funds on the call money market and individual investors took loans to buy stocks on margin. The Dow Jones index went from 191 in early 1928 to a record high of 381.2 in September 1929. 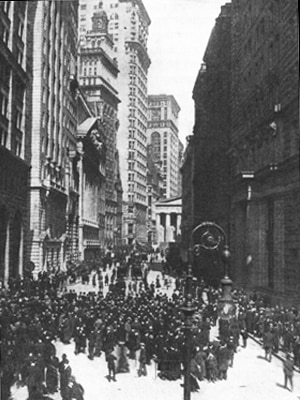 Crowds outside the New York Stock Exchange after the Wall Street Crash, October 1929.

News about public utility regulation and rising interest rates in the United States and abroad led to panic selling on Black Thursday (October 24) and Black Tuesday (October 29) of 1929. Nervous investors liquidated their holdings and the markets plummeted. The Dow Jones index fell to 248.5 units by the end of 1929.

Commodity prices fell. Industrial production decayed. Committed to the preservation of the gold standard and balanced budgets, policymakers did not use monetary or fiscal policies to stabilize the economy, greatly worsening the situation. As lenders retreated, nervous amidst bankruptcies and the Great Depression, fewer firms issued long-term capital in the 1930s. By 1932, stocks had lost nearly 90 percent of their value.