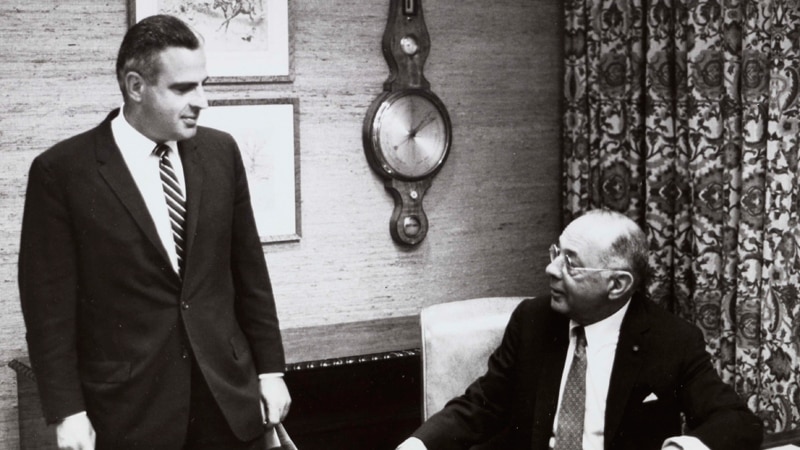 John Livingston Weinberg was born in 1925 in Scarsdale, New York. He was the son of Sidney Weinberg, who joined Goldman Sachs in 1907 and rose from a first job in the mailroom to the role of senior partner in 1930.

John Weinberg joined the Buying Department of Goldman Sachs in 1950 after serving overseas as a second lieutenant with the US Marine Corps in World War II – an experience that shaped his character and instilled in him strong leadership and teamwork skills. While still a teenager, Weinberg led Marine Corps troops in the Pacific. Later, he took leave from Goldman Sachs to serve as a captain during the Korean War. He was named partner in 1956.

With an unwavering commitment to clients, an innate modesty and a candid leadership style, Weinberg played a critical role in forging some of the firm’s most important and enduring client relationships in the 1950s, 60s and 70s. In the early 1970s, Weinberg ran the firm’s Fixed Income division. In 1976, he became co-senior partner of the firm along with John Whitehead, who had joined Goldman Sachs in 1947 as a junior statistician in the Corporate Finance department. Many predicted that a co-head structure at a firm like Goldman Sachs would fail, but the firm flourished under Weinberg’s and Whitehead’s joint leadership. When Whitehead retired in 1984, Weinberg, then 59 years old, remained on as sole senior partner for an additional six years.

Under Weinberg’s leadership, Goldman Sachs’ assets, geographic footprint and product offerings expanded significantly. His decision to accept a US$500 million investment from Sumitomo Bank of Japan in 1986 provided critical capital to the firm while keeping control in the hands of the partnership.

Exemplifying the commitment to clients Weinberg was known for, Goldman Sachs absorbed the largest underwriting loss the firm had ever taken following the 1987 Black Monday market collapse, when it stood by the pre-crash share price for the landmark British Petroleum privatization – a move that would win the trust and respect of the UK government and lead to numerous additional privatization-related mandates for the firm in the ensuing years.

Outside of Goldman Sachs, John Weinberg exhibited the same sense of dedication and excellence as he did at the firm. He served on numerous corporate boards, including Kraft, Seagrams, Knight-Ridder, Providian Financial Corporation and E. I. du Pont de Nemours and Company. His passion for effective corporate oversight is embodied in the John L. Weinberg Center for Corporate Governance at the University of Delaware. In the philanthropic world, Weinberg served as a director of the DeWitt Wallace Fund for Memorial Sloan-Kettering Cancer Center, a trustee of New York-Presbyterian Hospital and trustee emeritus of Princeton University and Deerfield Academy.

John Weinberg retired from Goldman Sachs in 1990, leaving the leadership of the firm in the hands of another set of co-senior partners, Robert Rubin and Stephen Friedman, both chairmen of the firm’s Management Committee. The transition, long-planned, was smooth. Weinberg maintained an active association with the firm first as senior chairman and then as a director after the firm went public. He died in 2006 at the age of 81.