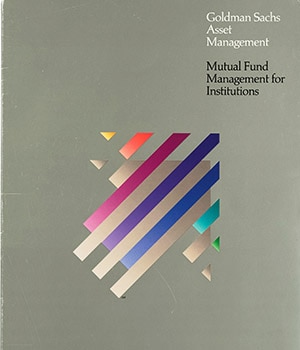 On September 16, 1988, the Management Committee of Goldman Sachs issued a memorandum to all employees announcing the establishment of a new division: Goldman Sachs Asset Management (GSAM) would focus on fixed income separate account management and on the expansion of the firm’s money market mutual funds, then totaling approximately US$11 billion in assets under management.

GSAM would provide a valued new service to the firm’s clients. Additionally, by virtue of its recurring, fee-based revenues, the new division could help offset the variability of profits from other areas of the firm, the value of which was thrown into stark relief following 1987’s Black Monday stock market crash.

This was not Goldman Sachs’ first foray into asset management. It had taken decades for the firm’s reputation to recover from the demise of the Goldman Sachs Trading Corporation, which collapsed following the 1929 stock market crash just a year after its launch. A later attempt — Kleinwort Benson McCowan, a joint venture in the 1970s with Kleinwort Benson — did not bear fruit, but the firm was determined to use lessons learned from these past endeavors to create a lasting investment management platform.

From its initial, targeted focus, GSAM grew in the ensuing years and decades to serve pension funds, endowments, foundations, unions, financial institutions, corporations and governments, as well as individual and family offices. Through a combination of in-house team and product development and selective acquisitions, its offerings expanded to encompass virtually all asset classes, including fundamental and quantitative equity, alternatives and multi-manager strategies. Notable was the firm’s 1997 acquisition of Princeton, New Jersey-based Commodities Corporation, a firm established in 1969 that was a trailblazer in the alternative investment space. The Commodities Corporation acquisition added US$1.8 billion in assets under management to GSAM and allowed Goldman Sachs to offer clients access to a range of high-quality, difficult-to-access hedge fund managers.

In July 1999, shortly after the firm’s initial public offering, GSAM and the firm’s Private Wealth Management group (composed of Private Client Services, Investment Management Services, and the Goldman Sachs Bank AG in Switzerland) were brought together under one umbrella in the newly formed Investment Management Division (IMD). All of the investment strategies the firm made available to institutions — in addition to select outside funds and products — could now be offered to its high-net-worth clients and other financial intermediaries globally. With IMD, there was one “engine” creating the investment strategies and products offered to the firm’s diverse global base of clients and strategic partners.

Since the inception of GSAM, Goldman Sachs’ investment management efforts have been rooted in the same principles that underpin other areas of the firm: a central focus on the client, a commitment to finding innovative, technology-enabled solutions, and a holistic approach to risk management. By 2018, GSAM oversaw more than US$1.5 trillion in client assets and was one of the world’s leading asset managers by assets under management. That year, the firm was named Emerging Markets Manager of the Year by European Pensions Awards and Global Alternatives Manager of the Year by EQDerivatives.