As Mexico pursues a program of economic liberalization and modernization, Goldman Sachs serves as advisor and global coordinator in the 1990 privatization of the country’s telephone service provider, Teléfonos de Mexico. 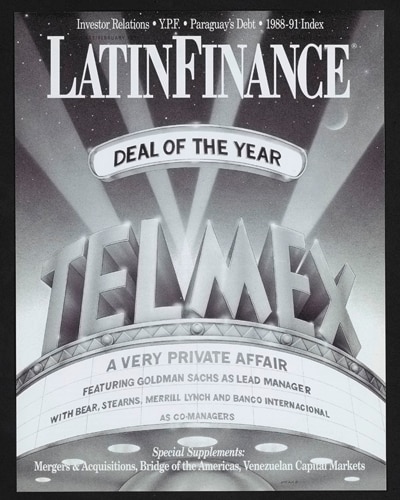 Mexico’s telephone system, operated by government-run Teléfonos de Mexico (Telmex) from 1972 until 1990, was mired in bureaucracy and inefficiency and in desperate need of modernization. New customers faced waiting periods of up to three years to get connected, while in the United States, Europe and Japan it took only days. In 1989, Mexico had just 4.9 telephone lines per 100 people and 8 out of 10 homes in the country had no telephone service.

During the late 1980s and early 1990s, Mexican policy makers adopted an ambitious program of economic modernization, free trade and the privatization of telecommunications companies and banks. In September 1989, Mexican President Carlos Salinas announced plans to privatize the phone system and sell the state’s 51% stake in Telmex. The move to privatization began in December 1990 with the Mexican government selling 20.4% and a controlling interest in Telmex to a group led by entrepreneur Carlos Slim’s Grupo Carso for $1.76 billion ($3.38 billion in 2019 dollars). Partnering with Grupo Carso were Southwestern Bell (US) and France Télécom. The Mexican government and agent bank Banco Internacional ISEFI chose Goldman Sachs as advisor in this transaction for its experience in the privatizations of British Gas (1986), British Petroleum (1987), and Telefónica of Spain (1987).

As Telmex’s new management group pushed to modernize the system, Goldman Sachs launched a global effort to sell more of the government-owned stake. In a May 1991 secondary offering, the firm served as the global coordinator for a $2.17 billion issue ($4 billion in 2019 dollars) of 79.75 million American Depositary Shares (ADSs), equivalent to 15% of the Mexican government’s stake in Telmex. Each ADS represented 20 “L” shares with limited voting rights. The creation of the L shares helped ensure that the offering would have global appeal and liquidity while remaining under Mexican control. This was the first international equity offering from a Mexican corporation, the largest offering for a Latin American company to date, and the largest equity offering in the Mexican markets.

Goldman Sachs also served as the global coordinator and lead underwriter in the May 1992 secondary offering of roughly half the Mexican government’s remaining stake in Telmex, raising $1.5 billion ($2.68 billion in 2019 dollars). By 1994, the Mexican government had sold its remaining 1.53% stake in Telmex. Goldman Sachs would continue to play an instrumental role advising Telmex into the next century as the company expanded into Brazil (2004-2006) and Colombia (2006-2007).