With SecDB, a Groundbreaking Risk Management Platform is Born

Securities Database, known as SecDB, is developed in 1993 and becomes the backbone of Goldman Sachs’ risk analytics platform for securities.

1993 marked a significant milestone in Goldman Sachs’ technological history, with the development of a proprietary software system called Securities DataBase (“SecDB”), a platform to price trades and assess risk for trading positions. The system was spearheaded by a distinguished team of Goldman Sachs “strats,” multi-disciplinary specialists who blend quantitative finance, engineering, and technology to design solutions across many areas of the business.

SecDB was originally conceived as a risk-management platform for the firm’s foreign exchange sales and trading business in J. Aron—one that would allow Goldman Sachs to be continually aware of potential losses from any inventory position. SecDB was first launched on November 24, 1992. Once proven successful in currencies and commodities, the firm looked to apply SecDB to other businesses within Goldman Sachs such that risk across the entire firm could be aggregated and measured in an integrated manner. 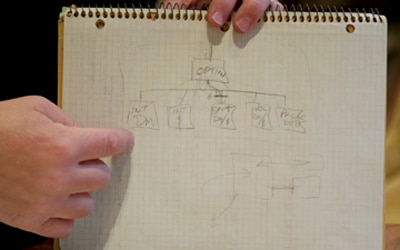 Diagram from the notebook of Michael Dubno, one of the original members of the SecDB team

The firm’s traders could access SecDB from their computers and use the system to measure the risk of loss related to a given position to perform scenario analysis on how the position might perform under different future circumstances, and even to determine a price to charge the trade’s counterparty. At an enterprise level, Goldman Sachs’ firmwide risk functions could use SecDB to aggregate trading risks across the entire firm.

At the same time as the firm was deploying technology across internal functions, Goldman Sachs also recognized the value of being able to connect with clients and share information electronically. In 1995, the firm launched the GS Financial WorkbenchSM, a website that both clients and employees could use to download research reports, access earnings and valuation models, submit trades, monitor accounts, build and view presentations, calculate derivative prices and view market data.

In 2013, SecDB was also made available to Goldman Sachs’ institutional clients through a platform called Marquee. A collection of web-based applications designed to deliver value-added content such as trade ideas and analysis, Marquee marked another milestone in Goldman Sachs’ digital journey—one that deepened the firm’s client relationships and reinforced its position as a leader in technological innovation.