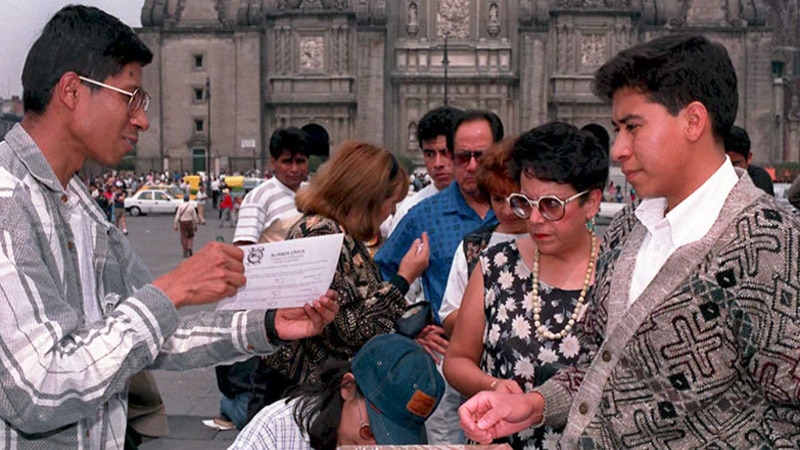 Residents of Mexico City participating in a popular referendum about the Chiapas rebellion and financial crisis, February 1995. (Gerardo Magallón/AFP/Getty Images)

Capital flight forces a depreciation of the Mexican peso in late 1994, creating a liquidity crisis that threatens global financial markets and unleashes a banking crisis and severe recession in Mexico during 1995.

After being the first country to default on its bank loans in the international debt crisis of 1982, Mexico entered a long period of economic recession. The Salinas administration (1988-1994) enacted liberalizing reforms to promote economic growth by opening Mexican markets to the world and attracting foreign direct and portfolio investment. The policy measures to modernize the Mexican economy included the privatization of banks and telecommunications companies, deregulation, and most importantly, signing the North American Free Trade Agreement (NAFTA), which paved the way for Mexico’s economic integration with the United States and Canada.

As foreign investors welcomed these reforms, capital flowed into Mexico. However, just as NAFTA went into effect on January 1, 1994, an indigenous rebellion erupted in the southern state of Chiapas, triggering a year of political instability and economic turbulence. Just as quickly as it had flowed into the country, capital began leaving Mexico at alarming rates. Several other factors contributed to this, including low economic growth, overvaluation of the peso, excessive short-term debt in dollars, a growing current account deficit, rising interest rates in the United States, and loss of international reserves. With foreign investors unloading Mexican securities, pressure mounted against the fixed exchange rate until December 1994, when the Zedillo administration (1994-2000) saw no other alternative than to let the peso float.

Concerned about the risk of Mexico defaulting on its debts, officials in the Clinton administration (1993-2001), led by US Treasury Secretary Robert Rubin, former co-senior partner of Goldman Sachs, quickly mobilized support. The US government, the International Monetary Fund, the Bank of International Settlements, and a syndicate of private commercial banks extended a US$50 billion standby loan to Mexico in an attempt to arrest the contagion of the “tequila crisis” to global financial markets.

The Mexican economy finally showed signs of recovery in 1996. That same year, Goldman Sachs co-lead managed two issues for Mexico: a US$1.75 billion, 30-year bond (the first by a Latin American government) and a US$1 billion 20-year bond (the first such offering for Mexico). The 30-year bonds replaced Brady bonds, created in 1989 to restructure the debts of developing countries affected by the 1980s sovereign debt crisis. The 1996 bonds aided Mexico’s debt restructuring by lengthening the maturity of its liabilities and freeing collateral to pay off short-term debt.