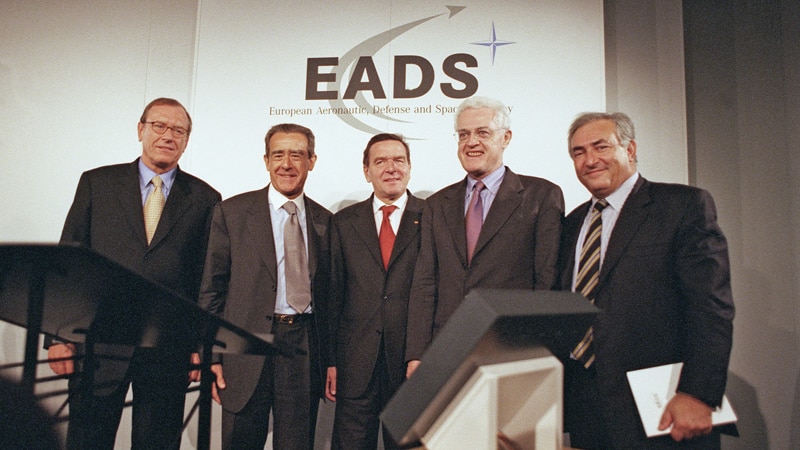 In October of 1999, Germany’s DaimlerChrysler Aerospace AG (DASA) and French company Aérospatiale-Matra announced they would merge, creating the world’s number three player in aerospace and defense, behind the United States’ Boeing and Lockheed Martin. Earlier that year, DASA had merged with another European aerospace company, Spain’s Construcciones Aeronáuticas S. A. (CASA).

The company that combined all three firms, initially called European Aeronautic Defense and Space Company (EADS), became the largest aerospace concern in Europe when the DASA/Aérospatiale-Matra merger was completed in 2000. EADS was the controlling entity of a consortium called Airbus, which in addition to DASA/CASA and Aérospatiale, also included British Aerospace PLC (BAe, later known as BAE Systems).

For many years leading up to the creation of EADS, European policymakers had sought to strengthen the continent militarily and create more independence from foreign suppliers. The new entity — bringing together German, French and Spanish companies — represented a significant step in that direction. Goldman Sachs advised Daimler’s DASA aerospace division in both mergers and was part of the underwriting consortium when EADS went public in 2000. Registered in the Netherlands, the company was listed on exchanges in Paris, Frankfurt and Madrid.

Thirteen years later, working with Goldman Sachs as its advisor, Daimler would sell its 22.45 percent stake in EADS. A year later, in 2014, EADS was renamed Airbus Group and by the end of the decade would rank as one of the top two companies globally in aerospace based on market share.