Goldman Sachs and JBWere announce the merger of their Australian operations in 2003, forming a new venture branded as Goldman Sachs JBWere.

In March 2003, Goldman Sachs and JBWere announced the combination of their Australian operations into a new venture branded as Goldman Sachs JBWere. The agreement brought together JBWere's prominent position in Australian and New Zealand equities trading, institutional broking, and research with Goldman Sachs' premier investment banking, fixed income and equities capabilities. This combination provided clients the highest quality access to both domestic and international markets. 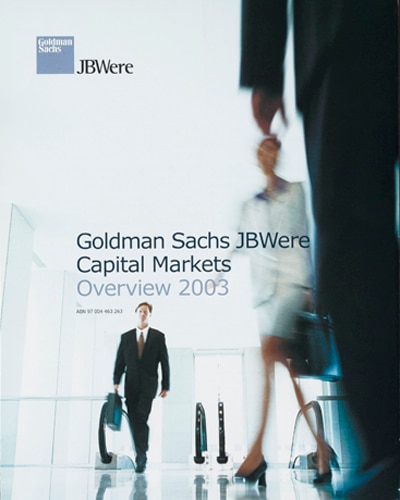 Founded in 1840 by merchant and stockbroker Jonathan Binns Were (1809-1885), JBWere was a leader in the capital formation process for Australian industry and commerce. Jonathan Were was founder and first chairman of the Melbourne Stock Exchange in 1859. JBWere was also recognized as the pre-eminent Australian investment house in equities research and funds management.

In 2010, Goldman Sachs sold the name JBWere and the firm’s retail brokerage business to the National Australia Bank Group. In April 2011, Goldman Sachs began the formal process of acquiring the remaining 55 percent of the joint venture (by then renamed Goldman Sachs & Partners), further solidifying the firm’s presence in Australia and New Zealand.