Starting with a small family business in India in 1976, Lakshmi Mittal created an international steel empire. In January 2006, he launched his most ambitious acquisition of all with a EUR18.6 billion (US$22.7 billion) bid for Arcelor SA. Arcelor itself was created via the 2001 merger of three European steel entities based in Luxembourg (Arbed), Spain (Aceralia), and France (Usinor). The multiple jurisdictions would complicate the efforts of both the suitor and the target company.

As part of its defense, Arcelor sought to raise legal hurdles across several European jurisdictions, while also initiating a stock buyback effort of roughly 20% of its outstanding shares. In addition, Arcelor secured the support of a white knight, Russian steel magnate Alexey Mordashov, willing to take a significant stake in the targeted company through an asset-swap with steelmaker OAO Severstal. 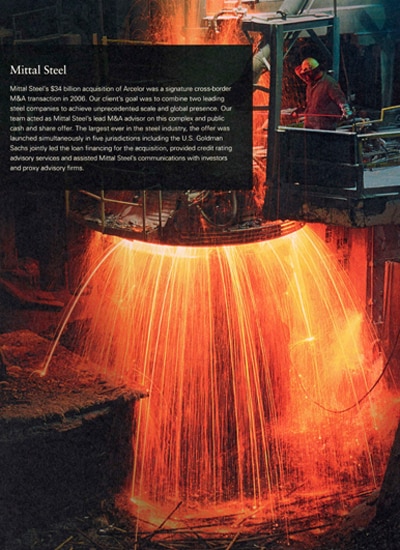 Working on behalf of Mittal Steel, Goldman Sachs employed an unusual tactic of getting 20% of the target company Arcelor’s shareholders to sign a letter designed to kill the investment from Mordashov and sidetrack the buyback effort. Ultimately, in June 2006, Mittal prevailed and Arcelor agreed to be acquired for EUR26.9 billion (US$34.4 billion), 49% over the initial bid in January and nearly double Arcelor’s pre-bid price. The combined group had a pro forma equity market value of EUR37.7 billion.

Mittal’s success in acquiring Arcelor required extraordinary coordination across more than five countries and featured a revolutionary effort to marshal European shareholders in a targeted company to impose their views on management. The deal marked the creation of ArcelorMittal, the world’s largest steel company.

In 2007, Goldman Sachs was the exclusive financial advisor of ArcelorMittal in its US$5.4 billion acquisition of the remaining outstanding shares in ArcelorMittal Brasil not yet owned by ArcelorMittal.