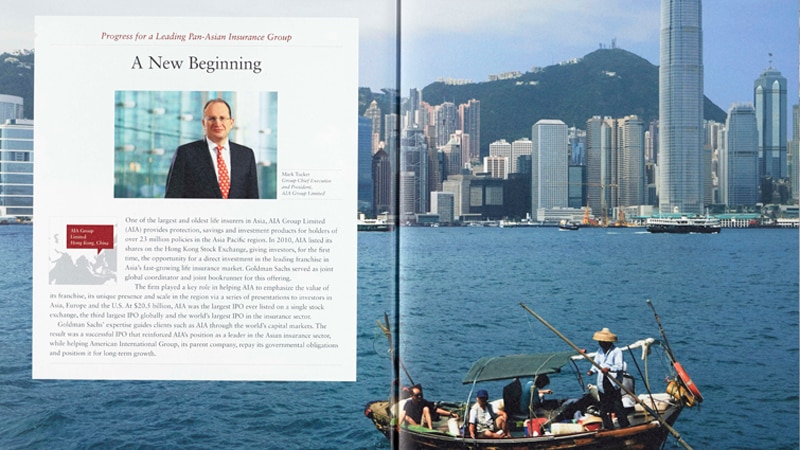 In 2010, Goldman Sachs serves as joint global coordinator and joint book runner for the US$20.5 billion initial public offering and effective privatization of publicly controlled AIG’s AIA Group unit, one of the largest and oldest life insurers in Asia.

Founded in 1919 in Shanghai, AIA Group (AIA) had been the main Asian subsidiary of American International Group (AIG) until 2010, when AIG decided to sell it as part of its efforts to repay U.S. taxpayers, who then owned 79.9% of the firm since its bailout during the 2008 global financial crisis. When AIA made its market debut in 2010 on the Hong Kong Stock Exchange, it was the third largest IPO globally and the largest-ever insurance IPO.

Goldman Sachs had been tapped as senior book runner for an AIA IPO earlier in the year, when the UK insurer Prudential stepped in with a private offer of US$35 billion for AIG’s Asian unit. When Prudential’s offer fell through, AIA promoted Goldman Sachs to joint global coordinator, joint book runner, joint sponsor, sole stabilization manager and settlement agent for the offering, which raised US$20.5 billion.

The AIA offering afforded investors the opportunity to make a direct investment in Asia’s fast-growing life insurance market, and it came at a time when global investors were eager to participate in the region’s growth. For the first three quarters of 2010, Asian IPOs raised US$90 billion, more than double the amount raised in the same period from the US, Europe, the Middle East, and Africa. As of 2019, AIA was the world’s largest independent publicly listed pan-Asian life insurance group, serving 18 markets across the Asia-Pacific region.

The landmark AIA transaction attested to Goldman Sachs’ continued ability to successfully guide clients through the world’s capital markets and position them for long-term growth. It was one of several significant transactions the firm led and/or participated in that same year in Southeast Asia, among these a US$1.84 billion convertible bond offering for telecom operator China Unicom and numerous real estate equity transactions, including the region’s third-largest real estate investment trust IPO.