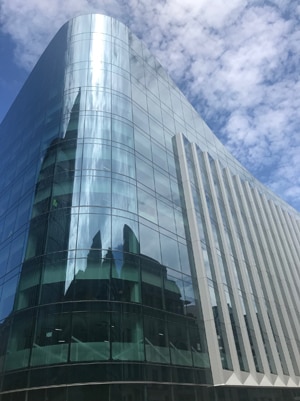 Goldman Sachs’ physical presence in London dates to 1970. Through the 1980s and 1990s, the firm’s business in the United Kingdom flourished, culminating in the inauguration in 1991 by former Prime Minister Margaret Thatcher of a 565,000 square-foot, 12-story office building on Fleet Street that would serve as the firm’s new European headquarters. Peterborough Court would serve this function for nearly three decades.

By the early 2010s, it had become clear that a larger space would be required, and an ambitious long-term project began to construct a new workplace that would suit the future requirements of the firm and bring together its London-based staff under one roof.

Goldman Sachs’ own Corporate Services and Real Estate department acted as developer and project manager, ultimately securing two parcels of land of 2.4 acres within the City of London for the new building, and the construction of Plumtree Court commenced in 2016.

Located just a few minutes’ walk from the firm’s prior London campus, Plumtree Court is an 850,000 square-foot building designed by lead architect Kohn Pedersen Fox, to foster productivity, connectivity, and employee wellbeing. The building features a series of central amenity hubs across eight workplace floors that include meeting rooms of various sizes, plus pantries, barista-style coffee bars and ‘soft seating’ for planned or impromptu employee meetings and discussions. The building also has a large central atrium that draws light throughout the expansive floorplates. A 350-seat auditorium caters for special events and conferences, with a client center featuring 29 conference rooms connected to a rooftop event space that features views across the City of London, including The Shard and St. Paul’s Cathedral.

Reflecting Goldman Sachs’ commitment to sustainability and supporting the communities in which the firm operates, Plumtree Court was designed to meet the BREEAM Excellent rating for its environmental performance; in its construction, Goldman Sachs prioritized the hiring of local small businesses in the supply chain and encouraged the involvement of apprentices. Plumtree Court’s green roof terrace contributes to its sustainable operation while also offering stunning panoramic views of the City. The building also features a dedicated facility for those who cycle to work, with 455 bicycle parking spaces.

In early 2019, Goldman Sachs entered into a commercially compelling sale and leaseback agreement, taking a 25-year lease on the building. Migration into the new space began in July 2019 and was completed before the end of the year.