With nearly $700 million dollars invested across 25 projects, impact investing efforts in Newark and neighboring East Orange have resulted in over 2,000 units of mixed-income housing, six nonprofit charter schools serving more than 3,500 students, and much needed retail space and community facilities. 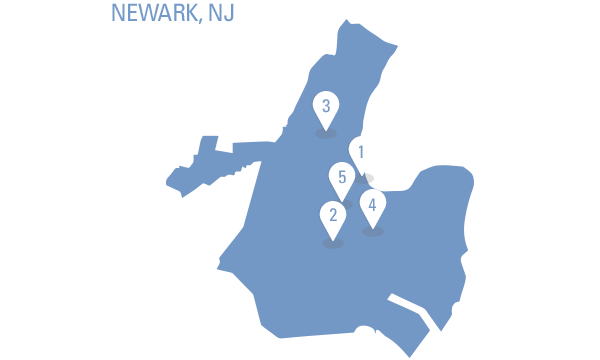 The restored building features an arts and cultural center operated by Rutgers University-Newark, envisioned as a way to link the university’s campus and students to the wider neighborhood, and approximately 75,000 square feet of new retail space on Broad Street, including Newark’s first Whole Foods Market and a Barnes & Noble that will serve as Rutgers University-Newark’s campus bookstore. In addition to retail, commercial and community space, the development includes 160 new apartments—64 of which are set aside as affordable homes for low-income families.

“We are thrilled to be a part of the public-private partnership that has turned this extraordinary project into a reality,” said Margaret Anadu, head of the Goldman Sachs Urban Investment Group. “This restoration is an important part of our over $500 million investment in Newark to catalyze economic development and create jobs for local residents. The building will provide access to affordable housing and healthy food options while also serving as an important gathering place toward the creation of a “24-7” community in this neighborhood.”

The renovation was financed through a collaboration of public, nonprofit and private groups, including commitments from the New Jersey Housing and Mortgage Finance Agency and New Jersey Economic Development Authority. Private equity was provided by L+M, Prudential and Goldman Sachs, and additional construction financing was provided by Citibank and three nonprofit CDFIs.

The Hahne & Company Department Store was designed by architect Goldwin Starrett and built by local businessman Julius Hahne in 1901. The art deco store, built as the company’s flagship, was the first commercial building in Newark designed specifically as a department store. In 1987, Hahne’s was sold to May Department Stores Co., owner of Lord & Taylor, and the building has remained vacant since then. The building was listed on the National Register of Historic Places in 1994.

In four transactions between 2013 and 2015, Goldman Sachs secured $30 million in funding to finance the first two phases of a project to redevelop a 69,000 square foot industrial building located in Newark’s Ironbound neighborhood.

The project is part of an ongoing effort by the city and the community to transform functionally obsolete industrial buildings into highly efficient light industrial spaces, better suited to the needs of today’s economy. These facilities will allow Newark to promote economic development and create jobs in an area where the unemployment rate is more than 2x the national average.

The building’s first anchor tenant will be AeroFarms, an innovative clean-technology firm that builds, owns, operates and leases state-of-the-art vertical farm systems for urban environments. The company’s award-winning, proprietary aeroponic and LED technologies will allow its urban farms to grow up to 22 crop turns per year, compared to three turns per year via conventional methods. The systems require no pesticides and use 95% less water than traditional farming methods.

In the project’s first two phases, AeroFarms will operate the world’s largest aeroponic farm on the site, creating approximately 78 new permanent jobs. It will also allow Newark to meet the goals of its Sustainable Action Plan by stimulating urban agriculture and engaging youth in food education and literacy.

Teacher’s Village is a multi-phase project designed to create new space for schools, workforce housing for teachers and street-level retail in support of the economic growth in downtown Newark.

Upon its completion, Teacher’s Village will include eight buildings across a five-block area. As lead financial partner,Goldman Sachs has committed more than $115 million to its development.

The project is expected to create 500 jobs during construction and 480 permanent jobs. Construction continues on the next two phases of Teachers Village, which will create 205 workforce housing units designed for Newark-based teachers and over 70,000 square feet of ground floor retail space for not-for-profit organizations, small businesses, and restaurants.

Goldman Sachs is a lead partner in the development of a transit-oriented, mixed-use development in the University Heights neighborhood of Newark, New Jersey.

The Springfield Avenue Marketplace will include a ShopRite grocery store, bringing much needed fresh produce to the community, as well as 152 rental housing units and 52,000 square feet of retail space.

In addition to being a transit-oriented development, the development encourages urban walkability through the proximity of the residential units and the retail space. The project is expected to contribute over 250 permanent jobs to the local economy.

One of the oldest and most successful charter schools in Newark, Marion P. Thomas Charter School serves a critical role in the community.

In May 2014, the Goldman Sachs Social Impact Fund closed a $15 million senior loan to finance the construction of a new, 73,500 square foot facility that will support up to 600 students. The new building will feature modern classrooms, advanced science and computer labs, a black box theater and a state-of-the-art culinary learning facility. There is no other Newark public school that can currently provide similar programming in one centralized location.

The project is the second phase of the Housing Authority of the City of Newark’s ongoing energy conservation program designed to reduce its carbon footprint and ensure healthy, sustainable affordable housing for its low-income residents by revolutionizing energy access and consumption. The innovative financing structure allows the public housing agency to implement energy efficiency upgrades whereby the cost of installation is paid for using the cost savings that result from reduced energy consumption in the future through an Energy Performance Contract.

The Energy Performance Contract program was designed to result in significant energy and cost savings generated through energy conservation measures that will continue long after the equipment has been installed and help ease the considerable future capital improvement needs of the public housing authority. The Project not only includes the installation of equipment to better control energy consumption and waste, it also includes renewable energy sources such as solar panels and a wind turbine.