Breaking the Taboo on Discussing Race Starts with Acknowledging the Facts

Dane Holmes, Executive Vice President and Global Head of Human Capital Management of Goldman Sachs, shares his perspective on the benefits of having an open dialogue on race.

As I reflect on the celebration of Black History Month in February and as we enter into Women’s History Month in March in the US, I can’t help but pause and appreciate the honest conversations that are taking place at our firm around race and gender. These conversations can sometimes be uncomfortable, and are even taboo in a lot of places. It’s clear to me that it is impossible to improve the state of race relations without first coming to grips with the truth of our history and systematic racism in the world.

As the son of a black father and white mother, born in Chicago but raised in Atlanta, the conversation on race is one I’m quite familiar with. As a black man raising a black son, my father viewed it as his responsibility to educate me on a few truths in life. First, he let me know that the history books in school wouldn’t give me a full understanding of black history -- a lot of facts would be missing. My dad was talking about some hard truths being erased, like the fact that the foundation of the US economy was rooted in slavery, and that slavery and the treatment of the African American community was a vicious and brutal endeavor that put even children in shackles, like the ones now on display at The Smithsonian National Museum of African American History and Culture in Washington D.C.

Second, he told me not to make the smallest of mistakes -- and getting visibly angry was not an option if I wanted to stay alive in this world. This second point might seem overstated on my father’s part, but it’s important to remember that he grew up in a world of lynching. A 2015 report by the Equal Justice Initiative found that nearly 4,000 black men, women and children were lynched in twelve southern states between 1877 and 1950. Over that period Georgia, our home state, had 586 lynchings. His concern wasn’t overstated – it was based on his life experience.

When we moved to a new neighborhood, my mom, a white woman, was the one who did the house hunting. That was in response to the practice of “redlining” – a series of policies and practices that drove increased racial segregation and discrimination against minorities and minority communities. This practice led to decades of underinvestment in black communities and has modern day implications. A 2017 study by the Federal Reserve Bank of Chicago Economist determined that the history of redlining affected homeownership rates, home values and credit scores.

Acknowledging these truths was an important foundation for having an open dialogue on race in our home, amongst our friends, and even with people we didn’t initially know so well.

At Goldman Sachs, we also understand the significant benefits that come from having an open dialogue about these issues. We recently launched the Identity Matters initiative, in which our own people’s experiences are what shape the program. Participants take a self-assessment that asks a range of questions on how they carry out everyday tasks (e.g., true or false: I can hail a cab at any time of the day). The point of the exercise is to demonstrate how two people can seem so similar on the surface – same education, job, family structure and neighborhood – but can have completely different experiences in the world based on race.  The beauty of this program is that colleagues get to speak about their varied experiences and build understanding and empathy. 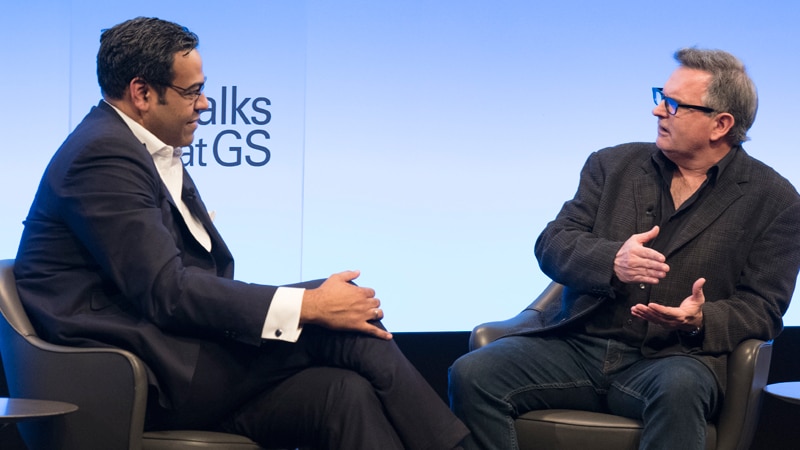 Dane Holmes (L) moderates a Talks at GS with Gilbert King, the Pulitzer Prize-winning author of "Devil in the Grove".

We have also benefited from having an open dialogue about what is one of the most taboo subjects in our society by inviting historians, authors and thought leaders to our Talks at GS program. Whether it be hearing from Gilbert King, the Pulitzer Prize-winning author of Devil in the Grove, [Watch Video - Gilbert King: Race, Justice and the Legacy of Thurgood Marshall] on how “we've never really acknowledged these atrocities that were happening,” or Van Jones, CNN host, on the history of over-incarceration of African Americans and tragedy of the bail bond system – we are starting to confront some of the “uncomfortable” facts that often go unspoken.

We are in the early stages of what will undoubtedly be a long-term effort – you can’t unwind centuries of history in a single conversation, but we are committed to creating a safe place for these critical conversations to take place. But to have a productive discussion on race, I come back to where I started: we have to first acknowledge our history and we have to own the modern day consequences.  If we do, the world will look quite different and the conversation will significantly improve.

We didn’t all have the benefit of a truth and reconciliation commission, but that doesn't mean we can’t try to create our own personal versions of one.