International Day of Persons with Disabilities: Reflecting on 2020

Each year around the globe, we celebrate Disability Awareness Month by hosting a range of events and forums to raise awareness of disabilities as a way of helping to create a more accessible and inclusive environment for our people.

At Goldman Sachs, we look to attract, retain and motivate people from many backgrounds and perspectives in order to reflect the communities in which we work. Part of these efforts are finding professionals to work with around the world who have disabilities but can flourish as the talented creative thinkers and leaders that they are. Our commitment to ensuring inclusivity and accessibility can be found in how we approach recruitment, vendor management, and client relationships.

India
The India Disabilities Interest Forum (DIF) in our Bengaluru office organized a series of events as part of Disability Awareness Month which is a key initiative focused on raising awareness on disabilities every year; the theme for 2020 being ‘Shattering of Stereotypes’ (SOS). DIF kicked off with a contest for their network members which involved creating a digital background image showcasing their interpretation of the theme SOS, and also how they envision contributing to a desirable future society with no stereotypes. The winning image of this contest was used as the zoom background for all the network’s virtual events!

The network also partnered with NGOs to host a combination of interactive fun sessions like ‘Riddle Me This (Quiz)’ and multiple speaker series to bring out different perspectives, bust stereotypes and increase awareness on disabilities amongst employees. The guest speakers included Sunil Jain (Founder of Aastha & active trainer of Para Athletes), Madhavi Latha (Paralympic sportsperson), Payal Kapoor (A Medical Emergency Specialist who is visually impaired) and Shalini Saraswathi (India’s blade runner). The stories shared by the speakers, their honest experiences on acceptance and determination and candid responses were not only inspiring but left the audience with a lot of takeaways. ‘Any inspiration or motivation that you get from other people or external sources is temporary and never lasts more than a day or two. Your true source of inspiration comes only from within you’, shared Shalini Saraswathi. Although more recent than Disability Awareness Month, the EMEA DIF invited colleagues to celebrate EMEA Disability Awareness Week, an internal series of events in recognition of International Day of Persons with Disabilities. The virtual event series was designed to increase awareness of the experiences of persons with disabilities in every aspect of political, social, economic and cultural life.

These events included charity networking, introducing unique language programs like Makaton that uses symbols, signs and speech to enable people to communicate in different ways, speaker sessions of colleagues addressing disabilities in the workplace, and a panel where individuals at the firm shared their personal experiences and perspectives on working with disabilities at Goldman Sachs.

In a conversation moderated by Jo Hannaford, head of the EMEA DIF, Baroness Tanni Grey-Thompson spoke about about her childhood experience with disability, her career as a Paralympian and breaking down barriers. She also shared her insights into working in the House of Lords and using her position to advocate and promote for equality and inclusion.

Back in October, another Paralympian, Michaël Jérémiasz, discussed his experiences as an athlete who looks to change perspectives on disabilities in a Talks at GS session hosted by Maryline Mertz, global head of Origination across Equities and FICC.

Around sixty of our people joined a sign language workshop hosted by Tokyo-based colleagues, Junichi Tanimura and Hideyuki Kodama. Both hosts are hearing challenged and conducted the session to shed light on their experiences and introduce tools that help them navigate through their daily activities. During the session, audiences learned about the challenges hearing impaired individuals have to face, even in mundane activities, such as having a telephone conversation to confirm a credit call application, or waking up to the sound of an alarm clock. Tanimura-san and Kodama-san also gave tips on ways to be inclusive when communicating with persons with hearing impairment. One participant noted, “I learned a lot! You’ve encouraged me to understand more about the ‘dinner table syndrome’ and how I can help to better support my hearing-impaired friends/colleagues in these situations.” 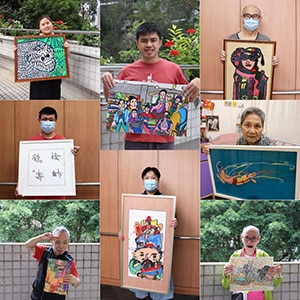 In our Singapore office, DIF supported the Purple Parade, Singapore’s largest movement to support inclusion and celebrate abilities of people with disabilities.

Our Asia Pacific (APAC) DIF also kicked off a silent charity auction, called Art Without Limit, which was joined by around 150 participants from across the region. By inviting representatives from three organizations, Scope Australia, Id-Art from Hong Kong and The Art Faculty from Singapore, our people learned about the work these organizations are doing in their respective communities and how they could better support individuals and artists with disabilities. A live auction was hosted over Zoom which was open to all APAC employees for bidding of the artworks. “It was a wonderful platform where artists with disabilities got to shine and resulted in multiple proud artwork owners,” Jacelyn Lim, the Executive Director of Autism Resource Centre (parent company of The Art Faculty) expressed. “Covid-19 has impacted every one of us this year, so it is an invaluable expression of support and solidarity for us that Goldman Sachs went ahead with the art auction program despite the challenges and constraints.”

Through a session called Seasons of Love Dancing Heart Troupe, participants in our APAC offices learned the art of dancing and its ability to empower individuals with special needs. Dancing Heart Troupe founder and renowned local artist and choreographer, Andy Wong, shared that individuals with special needs may face limitations in life but often can rely on dance to express their enthusiasm and showcase their talents. Participants were also encouraged to join in the dance virtually via zoom to show off some of their own dance moves!

The theme for this year’s Disability Awareness Month was “Increasing Access and Opportunity”, which resonates with our message of creating a more accessible and inclusive environment for our people. An event hosted by the DIF in Dallas included a conversation on STEM, technology and adaptation for the blind and visually impaired. Dr. April Hill, Professor and Director of Criminalistics at Metropolitan State University of Denver, described how making accommodations to allow for experimentation in the lab cultivates intellectual curiosity in blind and visually impaired students. “Lights are an accommodation for the sighted. We don’t identify them as accommodations when they are for the majority. But we make accommodations for everyone,” Dr. Hill mentioned. Dan Burke, Public Relations Specialist at Colorado Center for the Blind, also discussed how the Colorado Center for the Blind partners with Dr. Hill’s group and others to set high expectations for the participants in their program. “It isn’t easy, but these are a group of people who will not be denied.” An unexpected but impactful point during the event occurred when Dan experienced a technical difficulty when queuing a video segment he had prepared.  The audience was able to experience first-hand how screen reader technology works.

In recognition of the 30th Anniversary of the Americans with Disabilities Act (ADA), Karen Seymour, General Counsel of Goldman Sachs and global executive sponsor of the Disability Network, moderated a discussion with JoAnne Simon, a disability rights attorney and NY State Assembly member for the 52nd District in Brooklyn, about the history and impact ADA. This year’s theme, ‘Not all Disabilities are Visible’, is focused on spreading awareness and understanding of disabilities that are not immediately apparent, such as mental illness, chronic pain or fatigue, sight or hearing impairments, diabetes, brain injuries, neurological disorders, learning differences and cognitive dysfunctions, among others. The panel discussed topics such as best practices for inclusion and accessibility, and how ADA continues to influence disability rights 30 years later.

The Goldman Sachs Disability Network also hosted a ReelAbilities virtual film screening of the disability rights documentary ‘Crip Camp’ followed by a panel discussion hosted by Jennifer Krevitt, head of Human Capital Management (HCM) for the Investment Management Division and head of Global Ventures, featuring directors Nicole Newnham and Jim LeBrecht. The film tells the stories of young individuals with disabilities at a summer camp in the early 1970s. At the camp, the group experiences the freedom of expression, inclusion and liberation as human beings not constrained by their disabilities, and beginning their journey into adulthood. Strong bonds created at the camp continued for a lifetime as these individuals went on to drive change and advocate for disability rights and justice across communities. Jim, who is also one of the individuals at the camp, talked about the importance of inclusion and bringing aspects of the disability community to the table. Through the film-making process and working closely with Jim, Nicole said it made her and her team conscious of the need to build a more accommodating environment recognizing the difference individuals have and harnessing everyone’s potential. “You can think broadly and out of the box if you feel safe enough to do that,” stated Jim.

Through the powerful messages heard in the film and the conversation with the directors, Jennifer re-enforced the ideologies that we share at Goldman Sachs – recognizing the differences that individuals have and proactively building an inclusive environment that encourages everyone to deliver their best.

----
While we are honored to reflect on how we celebrated our people in 2020, we are also looking forward to the second annual Neurodiversity Hiring Initiative (NHI) in 2021. NHI is an eight-week, paid internship program for people who identify as neurodiverse, and aims to empower and continue to integrate neurodiverse people into our workplace. Through robust training, coaching and mentoring, the program will position participants for the long-term career path that they deserve. Our 2021 Neurodiversity Hiring Initiative will take place virtually next year.