I submit this statement for the record before the Subcommittee regarding our experience in supporting small businesses nationally during this crisis through partnerships with Community Development Financial Institutions (CDFIs). Your leadership in Congress, others in the federal government, the Centers for Disease Control and Prevention, state and local authorities, and the financial authorities acted swiftly and with care to this unprecedented medical emergency. This is without a doubt one of the most unique and challenging periods in history – one that’s shaping our neighborhoods, cities and country in historic ways.

On top of the pandemic, another issue plagues our nation and I want to acknowledge it. I (along with the Goldman Sachs community) continue to grieve for the lives of George Floyd, Ahmaud Arbery, Breonna Taylor and countless other victims of racism. These recent horrific and senseless acts of racism and violence in Minnesota, Louisville, and Georgia have no place in our country, and highlights just how far we need to go to create a more just and tolerant society. It’s been almost 60 years since Dr. King envisioned a future where his children would not be judged “by the color of their skin,” and it is tragic that there’s been so little progress toward making his dream a reality. The awful events of the past few weeks show that now is not the time to be silent, and that we must redouble our efforts to build a more equitable society.

Given the nature of this crisis, its uncertain duration, the disparities it has highlighted and the anger it has unleashed, it is clear that the government and the private sector together must work to cushion the blow to our economy and chart a path to rebuild communities. The troubling reality is that minority communities have been hit disproportionately hard by the pandemic. This moment is a crisis within a crisis for black Americans especially. COVID-19 presents a disproportionately deadly threat to black Americans. Recent data from American Public Media Research Lab indicates that roughly 13,000 black Americans would still be alive today if they had died of coronavirus at the same rate as white Americans. And Black Americans are disproportionately represented in the essential worker population and unemployed population.

One way we are trying to do our part to heal this wound and support black communities, as well as other minority and underserved communities around the country, is to support CDFIs, Minority Depository Institutions (MDIs) and other mission-driven lenders so that they can provide the necessary funding to small businesses who are trying to keep their businesses alive and employees on the payroll. Over the last 10 years, we partnered with CDFIs and made a $250 million commitment, the largest single commitment to CDFIs at the time. Through these partnerships, we have seen firsthand how important and effective these institutions are in reaching businesses and communities often overlooked by traditional banks.

Goldman Sachs Partnerships with CDFIs Before the Paycheck Protection Program (PPP)
When the COVID-19 crisis first started to emerge in the United States, we reached out to small businesses through our 10,000 Small Businesses program and local leaders, as well as to our CDFI partners across the country. It quickly became clear that small businesses needed capital immediately and that federal relief would take time to make its way through Congress. In order to provide immediate funding to these small businesses, we developed city-level partnerships with a CDFI (Minneapolis-based Community Reinvestment Fund, USA) and a similar mission-driven lender (New York-based Pursuit). Of course financial capital was needed, but also philanthropic capital, and human capital. These efforts materialized into two emergency small business loan funds for New Yorkers and Chicagoans in partnership with the mayors’ offices and CDFIs. These CDFI-administered funds, which occurred before the CARES Act was passed, provided 0% or low interest rate loans to small businesses. These emergency loan funds helped bridge the gap for local businesses in the weeks leading up to the passage of the CARES Act.

Small Business Voices that Guided Our Approach
Knowing how rapidly the crisis was expanding and evolving, we wanted to ensure that our efforts wouldreach businesses most in need by relying on data. In April, we decided to send a survey to thousands of small business owners who graduated from our 10,000 Small Businesses program. From this group we heard that there was incredible interest in and optimism about PPP:

For those business owners who were aware of the PPP, understood its nuances, and had a bank to turn to for a PPP loan, the PPP seemed to be hugely beneficial. Unfortunately, this was not the reality for all small businesses. The data also highlighted a glaring disparity: the application rate and approval rates for black-owned small businesses both were 12% lower than the overall rate.

This troubled us at Goldman Sachs. It was clear we needed to do better.  We decided to commit $500 million in capital for PPP loans across the country solely through CDFIs and mission-driven lenders, building upon our decade of partnerships together, including in times of crisis like Hurricane Sandy in 2012 and Hurricane Harvey in 2017.  We were very intentional with the CDFIs we partnered with. Ultimately we provided lending facilities to six organizations, four of whom were minority-led, including two of the most active black-led CDFIs in the country. Specifically, we have partnered with HOPE, Lendistry, CDC Small Business Finance, LiftFund, Pursuit, and Community Reinvestment Fund, USA. Sensing that the enormous demand for PPP loans would strain CDFIs, as it would any institution, we also provided $25 million in grants to build additional capacity as soon as possible not only to our six PPP lending partners, but to a broad range of organizations supporting small businesses, including CDFIs, MDIs and grassroots technical assistance providers.

Who Our Capital Has Reached via PPP Loans
Now that nearly two months have passed since our efforts began, below is a brief snapshot of what we have accomplished with our community lending partners.

Below is an illustrative summary of who our capital has reached in the past 10 weeks through our partnerships with CDFIs: 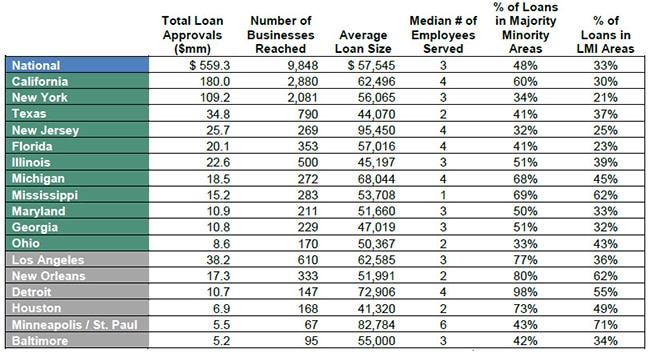 We and our CDFI partners have received numerous notes from business owners across the country who were surprised and even sometimes overwhelmed that CDFIs would spend significant time with them to understand the program, fill out the application, and be there as a resource throughout the process. One of our CDFI partners, Mississippi-based HOPE (which is run by CDFI pioneer Bill Bynum) reached out to churches across the south to offer assistance in an effort to ensure that as many churches as possible received loans not only to support their own finances and employees through this crisis, but also because of the important role these same institutions would play in raising awareness about PPP loans and in the recovery. We all agreed that these faith-based institutions will need to be as strong as ever to help heal their communities. One success story from HOPE’s efforts includes providing a PPP loan to a small, predominantly black church in Alabama. When the church leader submitted the articles of incorporation as part of the loan application, the document was handwritten and over 120 years’ old. Without the concerted effort of CDFIs like HOPE, long-standing institutions such as these may not survive this pandemic at this crucial and unprecedented time.

Looking Ahead
To further reach minority-run institutions and businesses like this who sometimes struggle to access financial services, we are proud to announce that we are launching two new partnerships alongside our CDFI partners this week.

First, we are launching a partnership with the National Urban League to increase awareness of and provide access to the PPP. Alongside three CDFIs and the twelve Urban League Entrepreneurship Centers around the country, we are hosting a series of webinars tailored to address specific feedback, questions, and concerns we have heard from black small business owners. We have also created a direct PPP loan application channel for NUL members. With the backing Goldman Sachs loan capital as well as grant funding, the CDFIs will work closely with the local Urban League teams to provide individualized technical assistance throughout the application and loan forgiveness process. The webinar content and technical assistance will have a specific segment on sole proprietorships, given that at least 94% of black-owned businesses are structured as such.

Second, this week we are also launching a similar partnership with the US Hispanic Chamber of Commerce, through which mission-driven lender CDC Small Business Finance will provide similar access to PPP capital provided by Goldman Sachs lending facilities, technical assistance provided in English or Spanish, and a webinar to address frequently asked questions about the program.

There is a lot more work that must be done across the country. And we are excited that our CDFI partners are still lending and working to reach and support as many small businesses as possible.

For information helpful to U.S. small businesses to obtain funding, visit the Goldman Sachs U.S. Small Business Resource Center at https://www.goldmansachs.com/citizenship/10000-small-businesses/US/small-business-resources/. Thank you for allowing me to share our experience at Goldman Sachs with you and do not hesitate to reach out if we can provide any additional information or answer any questions you have.