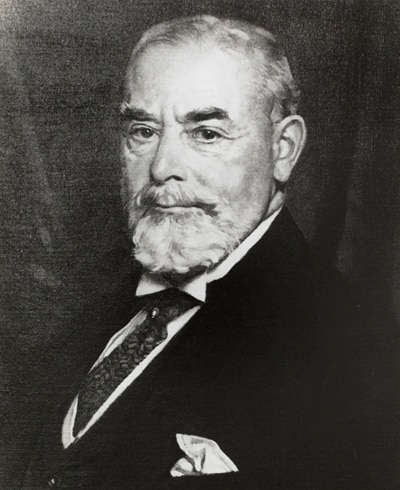 Born in 1851 in Maryland, Samuel Sachs had begun working at 15 as a bookkeeper and went on to run a small boards, glass, and mirrors business. When Samuel accepted his father-in-law’s offer, Marcus renamed the firm M. Goldman & Sachs. The firm became Goldman, Sachs & Co. in 1888.

An 1882 credit report from an R. G. Dun & Co. ledger archived in Baker Library at Harvard Business School described Marcus Goldman as "known on the street…as a very close conservative man, not at all speculative, and believed to be perfectly good for any contract that he will claim to undertake.” An updated listing in 1883 attested that Marcus Goldman and Samuel Sachs were “safe brokers.”

Known for being both meticulous and conservative, Samuel Sachs was deeply devoted to establishing the company’s reputation and standing in the banking community. He believed in building the business gradually based on earlier successes, and he remained committed to commercial paper, the firm’s most important business, even as the company expanded into self-liquidating transactions, money market activities and arbitrage. He pioneered the issuing of stock as a way for new companies to raise capital.

By the 1890s, Goldman Sachs had become one of the largest dealers of commercial paper in New York. After Marcus Goldman’s death in 1904, Samuel and his brother-in-law Henry Goldman became the firm’s senior partners.

Samuel was instrumental in driving the firm’s expansion into foreign markets. He was the first to argue that American clients would only be served fully if Goldman Sachs expanded overseas, and he envisioned the company as a truly international banking firm.

In June 1897, Samuel traveled to London to develop relationships with renowned merchant bankers Kleinwort, Sons & Co., laying the groundwork for expanding the business globally.  He also built connections in Paris and Berlin, establishing the firm’s reputation in European markets.