Near the turn of the twentieth century, as the firm’s business continued to grow, Samuel Sachs sought overseas expansion into Europe. In addition to the market opportunities, he was enamored of the continent, traveling there frequently on holidays. In 1897, he arrived in London with a letter of introduction to the established merchant bankers Kleinwort, Sons & Co. 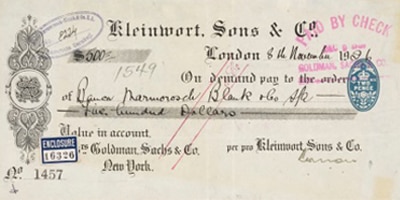 The introduction came by way of one of the world’s leading coffee merchants, Herman Sielcken, the “Coffee King,” who was established in New York and London. Kleinwort, for its part, had roots in Havana, but in 1858, Alexander Kleinwort opened a London acceptance house named Drake, Kleinwort & Cohen.

Herman and Alexander Kleinwort knew little of the US firm but on the basis of an endorsement by financier August Belmont, Jr., the Kleinworts agreed to the joint endeavor. The relationship proved successful from the outset and thrived for decades. Goldman Sachs and Kleinwort worked closely together on joint accounts in London, Paris, Berlin, Amsterdam and Budapest. They specialized in foreign exchange and stock arbitrage, both of which were regarded as profitable and growing businesses.

In 1911, to facilitate the placing of American securities in the French capital markets, Goldman Sachs established a private banking house in Paris, in association with Lehman Brothers, Kleinwort, Sons & Co. and Henri Hoechstaedter. The bank, known as Henri Hoechstaedter & Cie., was liquidated in 1921 due to the financial woes of interwar Europe.