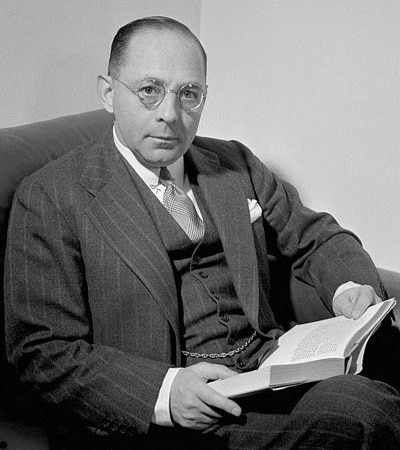 Sidney Weinberg was born in 1891 and began working at an early age, delivering feathers for a milliner, selling newspapers and acting as a messenger for investment firms. He joined Goldman Sachs at the age of 16, starting as an assistant to the janitor, where his responsibilities included brushing the hats of partners and cleaning spittoons. He was named a partner in December 1926. During his career at the firm, which would span more than six decades, he would rise to become senior partner and one of the most powerful men on Wall Street.

In 1930, with the financial world in disarray at the height of the Great Depression and the firm’s survival in question after the collapse of the Goldman Sachs Trading Corporation, Sidney was named senior partner of Goldman Sachs. With a focus on integrity and an innate ability to build relationships with clients, Sidney oversaw the reemergence of the firm’s underwriting business and led the rebuilding of Goldman Sachs’ role as a trusted advisor, earning him the moniker “Mr. Wall Street.”

Under Weinberg’s leadership, Goldman Sachs acquired Hathaway & Co.  in 1932, greatly strengthening the firm’s position in the US commercial paper market. In 1956, he endorsed the recommendations of John Whitehead regarding the creation of what would become Investment Banking Services, dividing the tasks of managing client relationships and providing investment banking services – revolutionizing an industry in the process. Nearing the end of his tenure, Weinberg welcomed the adoption of the Management Committee in 1965, which greatly eased the transition of power between Weinberg himself and Gus Levy.

Few financiers have sat on more corporate boards than Sidney Weinberg (35 directorships). He served as a director for some of America’s largest, most prestigious companies, such as General Electric, General Foods, National Dairy (later Kraft), B.F. Goodrich, Ford and Sears, Roebuck and Co. Sidney became a highly sought-after director, changing the perception of the duties and responsibilities of corporate board members from their “country club” connotation to that of rigorous governance and ultimate accountability.

Sidney also started a legacy of public service by Goldman Sachs leaders when he helped launch the Business Advisory and Planning Council in 1933.  During World War II, Sidney went to Washington, DC, as a vice chairman of the War Production Board under President Franklin D. Roosevelt. Sidney remained a senior partner of the firm until his death in 1969, the year when Goldman Sachs turned 100.