In June 1933, Sidney Weinberg and Joseph E. Davies (later U.S. ambassador to the Soviet Union) launched the Business Advisory Council at the urging of President Franklin D. Roosevelt. Formally known as the Business Advisory and Planning Council of the Department of Commerce, the council was conceived to provide insight and a business perspective to the administration regarding legislation and policy.

The council was established as part of Roosevelt’s New Deal agency, the National Industrial Recovery Administration (NIRA). Secretary of Commerce Daniel C. Roper identified two primary roles for the council: helping the department to maximize effectiveness with minimum burden on taxpayers and assisting in the development of research on topics such as productivity, international trade, debt, and capital investment. One of its first tasks was helping to shape the Industrial Advisory Board for the NIRA, which would advise on the nation’s efforts to recover from the Great Depression. In addition, committees were established to address issues related to initiatives such as the Securities and Exchange Act and the Social Security Act. 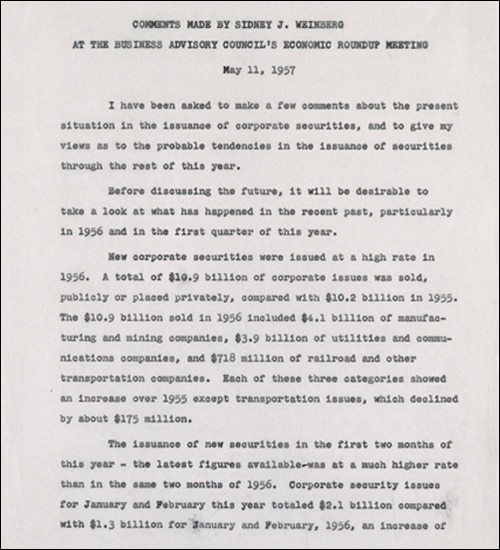 The council would meet four times a year (eventually changed to three times). Sidney Weinberg rarely missed a meeting, all the more impressive considering he served on the council for more than 30 years. The council originally featured 45 active members (expanded to 200 today). During World War II, dozens of members of the council served in the government as part of the war effort.

In 1961, the council expanded its scope beyond advising solely the Department of Commerce, offering its counsel to any area of the government that requested it. It was renamed The Business Council and today continues to serve as a nonpartisan forum for top CEOs to engage in candid discourse, exchange insight and bring their uniquely informed perspective on business and industry to governmental agencies and officials.