The Tokyo Stock Exchange Reopens in 1949

Closed shortly after Japan surrendered in 1945, the Tokyo Stock Exchange resumes operations in May 1949, contributing to the stabilization and growth of postwar Japan.

The Tokyo Stock Exchange (established in May 1878) was closed on August 1, 1945 during the final days of World War II. After Japan signed the act of unconditional surrender on September 2, 1945, stock market activity was prohibited after General Douglas MacArthur signed a directive on September 25. The Allied Forces established their General Headquarters in the building of the Tokyo Stock Exchange until January 1948.

The securities industry lobbied for a restart of market operations soon after hostilities ended. In March 1946, 1,000 Japanese brokerage employees requested the Allied Headquarters to allow the reopening of the Tokyo Stock Exchange. In August of that same year, the Japanese Stock Dealers Association elected a committee of thirteen to prepare the reestablishment of the Tokyo Stock Exchange.

Over-the-counter securities trading restarted in 1945 by brokerage clerks operating outside of the country's stock exchanges, managing a limited volume of transactions per day. After a new Securities and Exchange Act was promulgated in 1948, Japanese financial markets adopted American practices and standards like the acts adopted in the United States during the Great Depression, including separation of commercial and investment banking.

After the Allied Forces General Headquarters authorized the resumption of securities trading on January 31, 1949, the stock exchanges of Tokyo, Osaka, and Nagoya resumed business on Monday, May 16, 1949. Soon after, six additional Japanese stock exchanges reopened, supervised by the Japanese equivalent of the Securities and Exchange Commission. Margin trading was introduced in 1951 following the United States system.

Stock ownership broadened, with 12% of the population owning securities, compared to about half that number before the passing of the 1948 securities law. In the postwar decades the Tokyo Exchange surpassed its main rival, the Osaka 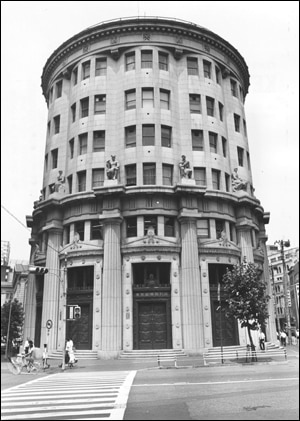 Stock Exchange. The Tokyo and Osaka Exchanges merged in 2011 to form the Japan Exchange Group in 2013.

In November 1950, the New York Stock Exchange reopened trading in Japanese dollar bonds, which had been halted on December 8, 1941, the day after Japan’s attack on Pearl Harbor. After negotiations with its creditors, Japan resumed interest payments on its dollar bonds in 1952.

The reopening of the domestic stock markets and the resumption of trading in Japanese dollar bonds in the United States were huge steps towards cementing the stabilization of the postwar Japanese economy. Japan became the second biggest economy in the world in the 1970s.