The Glass-Steagall Act Separates US Commercial and Investment Banking Activities 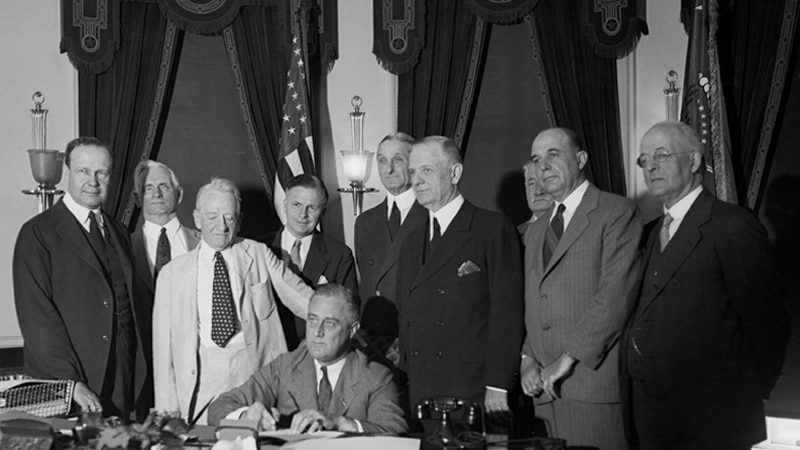 As part of financial reforms instituted during the Great Depression in the United States, the Glass-Steagall Banking Act of 1933 mandates the separation of commercial and investment banking, and the Securities Acts of 1933 and 1934 improve disclosure practices in the offering of securities to investors.

Before the financial crash of 1929, US securities markets were not subject to federal regulation. As a result, limited financial disclosure and fraudulent underwriting practices were not uncommon. After the crash shattered financial markets and the Great Depression began, investment banking activity ground to a halt, with virtually no public offerings of equities. Recognizing that urgent reforms were needed to reestablish the public’s confidence in securities trading, Congress conducted numerous hearings and passed legislation to restore investors’ trust in the capital markets.

The Glass-Steagall Banking Act of 1933 called for the separation of commercial banking (issuance of credit to households and firms) and investment banking (issuance and trading of securities). The Act, which went into effect in June 1934, mandated banks belonging to the Federal Reserve System to separate from their securities affiliates. Glass-Steagall also required private and investment banks to renounce deposit banking. The Act also created the Federal Deposit Insurance Corporation (FDIC) to safeguard depositors’ funds in commercial banks.

In the years before the crash of 1929, Goldman Sachs accepted some funds from depositors, but the firm did not act like a deposit bank by permitting checking accounts: withdrawal of funds could only occur by written or cabled transfer instructions. After the passage of Glass-Steagall, the partnership discontinued taking depositors’ money to comply with the regulation.

The first Securities Act of 1933 improved disclosure practices by mandating that more and better information be provided on companies issuing securities offered to the public. The Securities and Exchange Commission (SEC), created after Congress passed the 1934 Securities Exchange Act, emerged as the leading authority to regulate and supervise the securities business.

Goldman Sachs welcomed the Securities Act as “sound public policy” and the partnership registered with the SEC as a broker-dealer in January 1936. The firm prepared concise and to-the-point prospectuses of the offerings of stock from Continental Can Co. (1936) Sears, Roebuck and Co. (1937), and The Champion Paper and Fibre Co. (1944) that won favorable appraisal from investors, issuers, and government officers.

Financial deregulation in the 1980s and early 1990s and the 1999 Gramm-Leach-Billey Act dismantled the key provisions of the Glass-Steagall Act that prevented the affiliation of investment and commercial banks. These regulatory changes coincided with an increasingly competitive operating environment as large US commercial banks started pursuing investment banking activities, transforming the industry landscape once again.