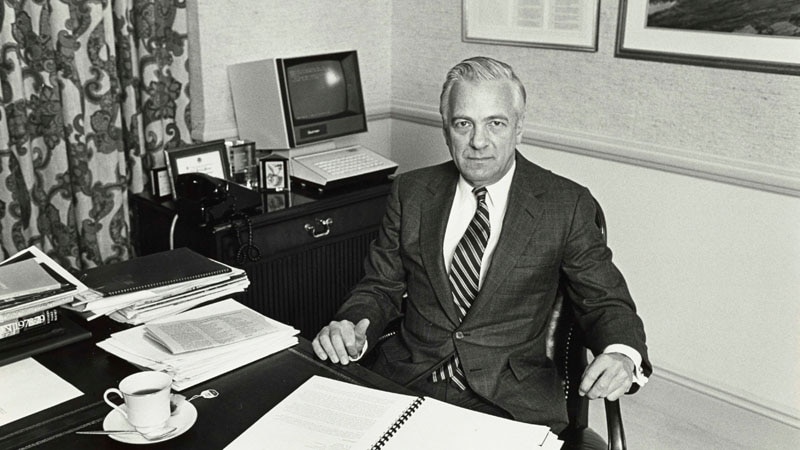 In one of the firm's most important industry innovations, John Whitehead submits a memo to Sidney Weinberg in 1956 outlining the establishment of Wall Street's first marketing arm for investment banking, later known as Investment Banking Services (IBS). 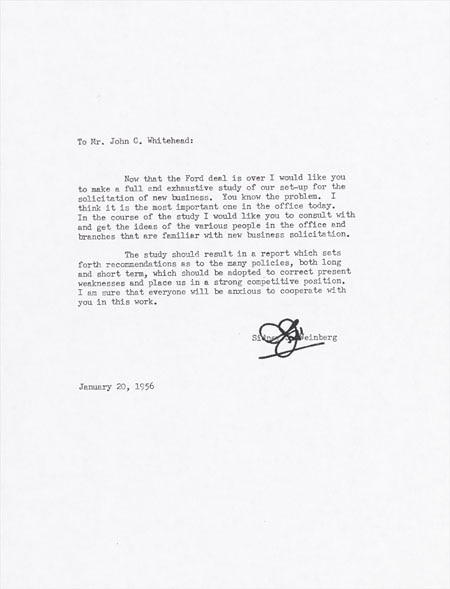 On March 14, 1956, partner John C. Whitehead submitted to Sidney J. Weinberg a memorandum that would revolutionize investment banking, not only at Goldman Sachs but throughout Wall Street.

The 26-page document was created in response to Sidney Weinberg’s letter sent two months earlier, on the heels of the landmark Ford Motor Company IPO. Noting the firm’s challenges in securing new business beyond Sidney Weinberg’s own extraordinary network, he instructed Whitehead to “make a full and exhaustive study of our set-up for the solicitation of new business. You know the problem. I think it is the most important one in the office today.”

In response, John Whitehead spoke with partners, business staff and even competitors about their new business organizations. What he then proposed not only changed fundamentally the new business approach at Goldman Sachs but the firm’s organizational structure itself.

Traditionally investment banking at every firm followed a number of unwritten rules. Clients came to the bankers. No banker would solicit business — and especially not from a competitor’s client. Most of all, the same investment banker who sold the service provided the service.

John Whitehead suggested a revolutionary concept: separating roles within investment banking between those who sold banking services and those who provided those services. Bankers would now specialize—either managing client relationships and selling banking services or providing the expertise to deliver those services. It would be a radical practice to launch a team that did nothing but cover clients and solicit business, a practice that many, including Sidney Weinberg, viewed with deep skepticism. But John Whitehead was undaunted.

The innovations that Whitehead pushed to implement were not overnight successes; many of these new practices took years to establish and even longer to bear fruit. But ultimately, the bold decision to create distinct roles proved to be a strategic advantage and helped to dramatically increase the firm’s client roster. One of the greatest endorsements of the new strategy was the fact that other investment banks throughout the industry eventually followed suit, retooling their own approaches and changing the investment banking landscape in the process.

This two-pronged approach of highly-focused client coverage paired with specialized banking expertise continues to serve as the model for investment banking success — echoing a vision launched with a single memo in 1956.