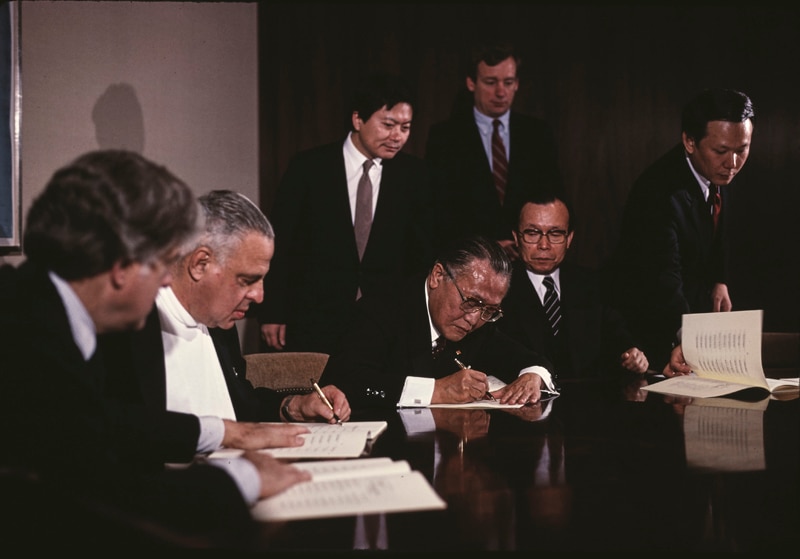 In 1986, Goldman Sachs accepts a US$500 million investment and limited partnership interest by Sumitomo Bank in order to meet capital requirements.

In August 1986, Goldman Sachs announced a landmark deal with Sumitomo Bank Ltd. The Japanese conglomerate would invest US$500 million in the firm, becoming a limited partner. While Sumitomo’s initial holdings would be debt predominantly, they would convert eventually into a 12.5% equity stake and allow Sumitomo to share in the annual profits of Goldman Sachs. The Federal Reserve Board approved the transaction in November of the same year, and the deal was signed on December 5th, 1986.

With the Sumitomo investment, Goldman Sachs increased its capital by more than a third, from US$1.33 billion to US$1.83 billion. The innovative deal secured for the firm the capital that was essential to remain competitive in an increasingly global market while maintaining its autonomy and partnership structure: while many competitors raised money by going public, the partners of Goldman Sachs had thus far resisted going down this path.

The firm ended 1985 as the sixth-largest Wall Street firm in capitalization, and with the Sumitomo investment, jumped to fourth in a deal that surprised many on Wall Street. While seen as a big win for Goldman Sachs, Sumitomo was equally contented; the investment helped fulfill the Japanese firm’s commitment to become a global financial enterprise.

Sumitomo’s investment was the first of several capital infusions Goldman Sachs received before its eventual 1999 IPO. In 1989, seven insurance companies invested US$225 million in the firm. In 1992 and 1994, it received passive investments from a Hawaiian educational trust, the Kamehameha Schools/Bishop Estate, which brought US$500 million for a stake in the firm.