The journey to becoming a public company was a long and introspective one for Goldman Sachs.  A partnership for most if its first one hundred years, the firm functioned briefly as a joint stock association between 1922 and 1927. In the late 1960s, Sidney Weinberg first weighed the possibility of taking the firm public, asking Gus Levy to canvas partners for their opinions. The idea lacked support at the time, and the vision of Goldman Sachs as a public company would not be realized until the end of the 20th century.

In 1971, recognizing the value of additional capital to grow the firm and the services it provided to clients, the Goldman Sachs Management Committee again considered incorporating. They went as far as printing new business cards before deciding that the partnership structure continued to be most advantageous. 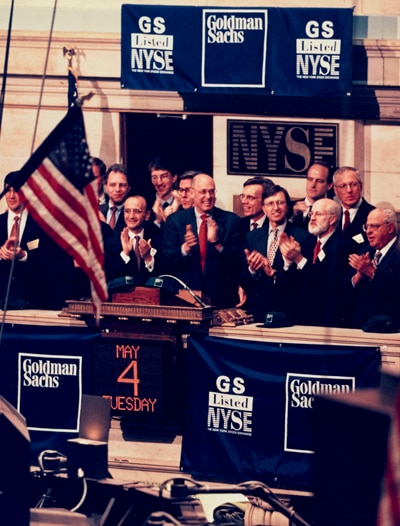 In 1986, a proposal by Steve Friedman and Bob Rubin (later named co-senior partners) to take the firm public generated heated emotional conversations among the partners. In the end, no vote was taken. Preserving Goldman Sachs’ unique partnership culture remained the prevailing consideration at the time.

In 1998, Goldman Sachs was the last big private investment bank in the United States. By then the business advantages of going public became undeniable, and the firm’s partners voted to undertake the same institutional transformation through which Goldman Sachs had guided hundreds of clients since 1906. The firm’s prospectus listed three principal reasons for going public: “to secure permanent capital to grow; to share ownership broadly among our employees now and through future compensation; and to permit us to use publicly traded securities to finance strategic acquisitions that we may elect to make in the future.”

At the time one of the largest financial services initial public offerings in US history, Goldman Sachs’ IPO on May 4, 1999, involved 69 million shares (a stake of 15%) and raised US$3.657 billion. The shares were offered at US$53 dollars and they rose 33 percent, closing at US$70.375. The Goldman Sachs Group, Inc. trades on the New York Stock Exchange under the symbol GS.