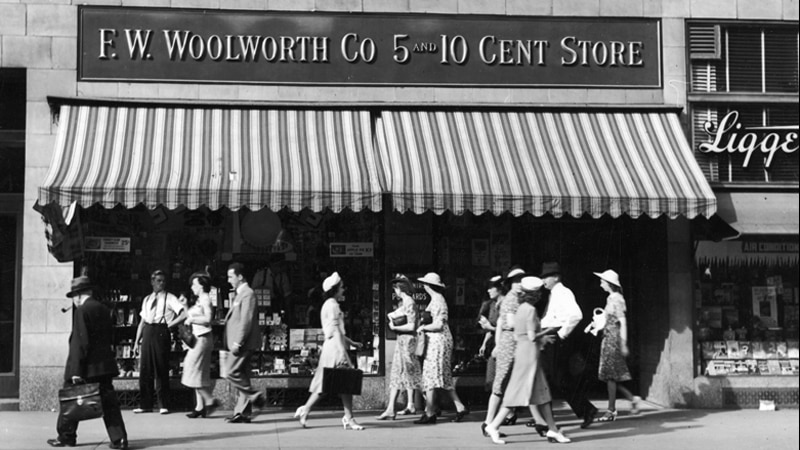 After being turned down by other underwriters, Frank Woolworth seeksout Goldman Sachs in 1912 to help finance his company’s rapid expansion, forging a decades-long relationship between the companies.

In the early twentieth century, Goldman Sachs continued its efforts to establish itself in the profitable but closed-door world of underwriting. Relationships between large, established corporations and their long-time bankers were seemingly immune to competition, particularly at a time when active solicitation of new clients — a competitor’s client — was seen as bad form. Most underwritings undertaken by Goldman Sachs between 1906 and 1917 were on behalf of existing commercial paper clients.

Henry Goldman’s close friend during that period happened to be Philip Lehman, one of five brothers running Lehman Brothers. Lehman also was stymied in his attempt to break into the underwriting market. Philip and Henry agreed to target underwriting business together. Profits would be split fifty-fifty. Eventually they would also include the British bank Kleinwort, Sons & Co. to help underwrite deals and sell them to investors in Europe.

The opportunity to work with F.W. Woolworth & Co. (founded in 1879) was due, in part, to the closed and clubby world of underwriting. After being turned down by other underwriters who felt it somewhat undignified to be associated with a chain of five-and-dime stores, Frank Winfield Woolworth sought out Goldman Sachs to help finance his company's merger with several “5 and 10 Cent” companies in New York, Pennsylvania, Connecticut, Massachusetts, and Canada, as well as twelve “sixpenny” stores in England.

The financing was considered aggressive at the time, a combination of preferred (US$15 million) and common (US$50 million) stock against US$52 million in sales. Goldman Sachs, Lehman Brothers and Kleinwort, Sons & Co. underwrote the deal. Preferred shares were retired a little over a decade later at US$125 a share.

Among Frank W. Woolworth’s ambitions was building his signature Woolworth skyscraper in Manhattan at 233 Broadway. At a dinner in April 1913 celebrating the completion of the landmark building, Woolworth took the opportunity to underscore the importance of the IPO to not only the growth of the company but the completion of the tower as well. According to Walter Sachs, at the celebratory dinner, Woolworth seated the architect Cass Gilbert next to him on one side, with Henry Goldman seated on the other. He introduced both to those in attendance by saying, “These are the two men who made this building possible.” Henry Goldman would be a director on the board of F.W. Woolworth & Co. until May 1918, when he retired from business.

More than half a century later, in 1971, Goldman Sachs issued US$125 million of 25-year sinking fund debentures for Woolworth, the company’s first public debt financing and its first public offering of any type of securities since 1912. The firm also worked on the acquisition of Kinney Shoe Co.— part of the ongoing remaking of the famed retailer into what later became known as Foot Locker (NYSE: FL). Goldman Sachs also successfully advised the company in its defense against Brascan’s attempted hostile takeover in 1979, and the sale of its stake in F.W. Woolworth p.l.c. in 1982.