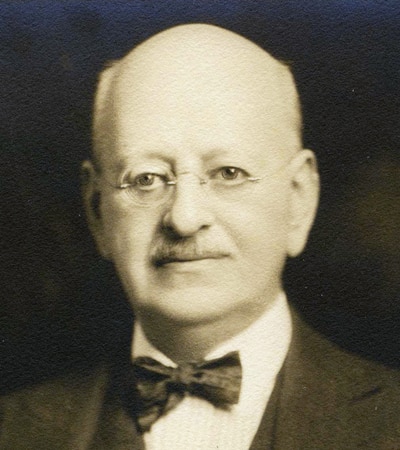 Henry Goldman was born in 1857 in Philadelphia, the youngest child of Marcus and Bertha Goldman. He attended Harvard but left without completing his degree. He spent several years travelling the West as a salesman for D. Rosenberg & Sons and worked in the mercantile firm of Dreyfus, Willer & Co. In 1885, his father invited him to join the firm. For the next three decades, Henry’s leadership and ingenuity helped transform Goldman Sachs into a leading financial institution.

Considered an innovative thinker by his colleagues, with a measured approach to risk, Henry sought to expand the firm’s business activities into new segments. He regularly traveled to Chicago, St. Louis, St. Paul and Kansas City to bolster the firm’s credentials in the Midwest. He was unintimidated by the biggest financial players of the era, and he encouraged his colleagues to compete for business that traditionally German-Jewish firms like Goldman Sachs had never before been granted.

Henry’s breakthrough came in 1906, when he started to focus on what was then a nascent industry: investment banking and securities dealing. At the time, most underwritings were in railroads and utilities. Henry sensed an opportunity in so-called industrial financings: funding privately-owned businesses, incorporating them and selling their equity to the public.

In 1906, seeking a way to obtain capital for the recently formed United Cigar, Henry developed the groundbreaking concept of using a company’s earning potential to attract long-term equity investments. The successful sale of United Cigar’s common shares became a model for future firm transactions, including the public offerings of Sears, Roebuck and Co. (also in 1906), Underwood Typewriter Co. (1910), B. F. Goodrich, and F. W. Woolworth (both in 1912), amidst many others. Henry served on the boards of most of the companies whose public offerings were underwritten by the firm. He retired from the firm in 1917 and died in 1937.