With the death of firm founder Marcus Goldman in 1904, Henry Goldman and his brother-in-law Samuel Sachs became co-senior partners. Together they would preside over substantial growth for Goldman Sachs into the early twentieth century.

Henry Goldman’s push to expand the firm was both complemented and tempered by the risk-wary Samuel Sachs. Among their accomplishments was Goldman Sachs partnering with Lehman Brothers (and Henry Goldman’s good friend Philip Lehman) to establish inroads into the insular world of investment banking by targeting clients such as United Cigar (1906), Sears (1906), and Woolworth (1912).

But when Germany declared war on Russia and then France and the United Kingdom in August 1914, following the assassination of Archduke Franz Ferdinand, heir presumptive to the Austro-Hungarian empire, a schism emerged among the leaders of the firm. While the majority of partners clearly backed the Allies, Henry Goldman was a vocal supporter of Germany, a situation encountered at other German-Jewish firms where partners had family, personal, and business connections with Germany, such as Kuhn, Loeb & Co. 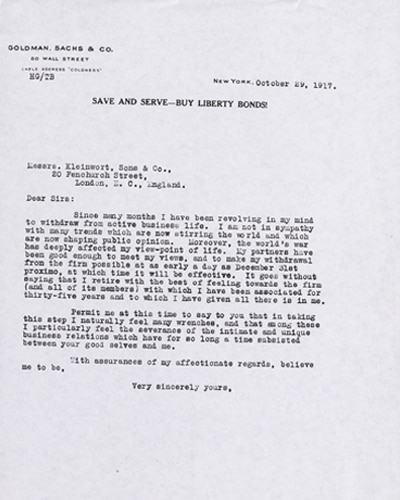 Despite entreaties from his partners to tone down his sentiments, Henry Goldman was defiant. His very vocal and problematic support of Germany sowed much discord with the other partners, particularly during negotiations of the Anglo-French private loan of 1915 floated by J. P. Morgan & Co. (to which Samuel and Harry Sachs subscribed personally) and the June and October 1917 3½ percent and 4 percent Liberty Bonds financing the US war effort. His sympathies posed a particular risk to the firm’s business in London through Kleinwort, Sons & Co.

As the war progressed, Henry Goldman’s position within the firm proved untenable. In October 1917, he retired from the partnership after 35 years, taking with him significant capital. With the departure, the firm would lose a long-time leader and a vast network of contacts for its underwriting business. Waddill Catchings would replace Henry Goldman as partner in charge of industrial financings.

The departure would also lead to a rift between the Goldman and Sachs families that would last for decades. Henry Goldman and Samuel Sachs never spoke again. In the 1920s and 1930s, Henry Goldman would travel to Germany, where he witnessed firsthand the fall of the Weimar Republic and the rise of Hitler’s Nazi regime.