In 1922, the Goldman Sachs partnership transitions to a new entity, Goldman, Sachs & Co., a joint stock association. By 1927, the firm would reconstitute itself as a partnership. 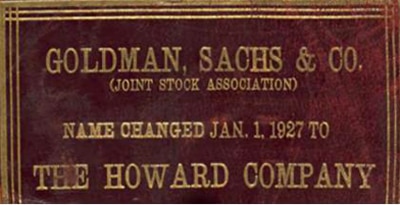 The Goldman Sachs 1999 initial public offering is sometimes referred to as the endpoint of the 130-year-old partnership. While the firm had operated as a partnership in its earliest days (in 1882, Marcus Goldman and Samuel Sachs formed a partnership to continue a commercial paper business that had been begun by Goldman in 1869) and for decades prior to the IPO, there was a brief period, from 1922 to 1926, when Goldman Sachs operated as a joint stock association. During these years, the firm was a corporation with common and preferred stock, “with the unlimited liability of all its stockholders.”

At the opening of 1922, the majority of assets of the former partnership were transferred to a new entity, Goldman, Sachs & Co., a joint stock association. In exchange, shares of common stock were issued exclusively to active partners, with preferred shares issued to partners with excess capital reserves as well as members of the Sachs family, who held funds in the former partnership.

As a result of the reorganization, Harry Sachs sold his seat on the New York Stock Exchange (NYSE). The previous partnership formula of distributed profit/loss was recreated by controlling the number of shares issued per partner. Arthur Sachs, Harry Sachs and Waddill Catchings were given majority control of the new company, mirroring the percentages of distributed profit/loss of the former partnership.

As reasons for the reorganization, the memo described reduced taxes and potential savings of US$190,000 a year in brokerage commissions. In addition, the firm could not belong to the NYSE as a corporation, only as a partnership.