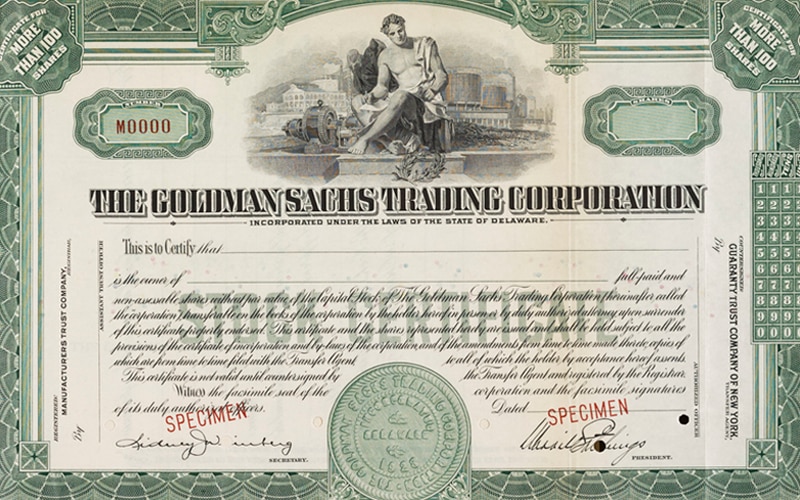 In December 1928, Waddill Catchings leads the firm’s formation of an investment trust, Goldman Sachs Trading Corporation (GSTC). By mid-1932, GSTC stock will plummet to virtually nothing.

In 1918, Waddill Catchings, a friend and Harvard classmate of Arthur Sachs, was asked to join the firm. A lawyer originally from Tennessee, Catchings had enjoyed success restructuring bankrupt companies following the Panic of 1907. He joined Goldman Sachs as partner in charge of underwriting, helping to organize General Foods and National Dairy Products (later Kraft). By 1928, Catchings owned the largest stake in the firm and wielded increased power and influence.

In December 1928, Catchings led the formation of an investment trust, Goldman Sachs Trading Corporation (GSTC), managed by the partnership and listed on the New York Curb Exchange (later the American Stock Exchange and then NYSE MKT), with stocks trading at an initial price of US$104. This was to be the largest investment trust yet established, with capital of US$50 million, a cash surplus of an additional US$50 million and, ultimately, 42,000 shareholders.

In early 1929, GSTC announced its intention to merge with the Financial and Industrial Securities Corporation. The news was greeted enthusiastically by investors, who pushed shares of the corporation up over 70 percent above their December 1928 issue price. Within three days, shares had more than doubled over their initial value.

The success of GSTC led the firm to plan an expansion using the trading corporation stock to acquire American Trust Company of San Francisco. Catchings went further and in July and August 1929 formed two more trusts with an interlocking, highly leveraged ownership structure: the Shenandoah Corporation and the Blue Ridge Corporation.

GSTC would bear the full brunt of the Crash of 1929. By January 1930, its market capitalization had fallen by over 50 percent to US$233 million and its share prices collapsed to US$40.94. By mid-1932, adjusted for splits, the stock ultimately fell to US$1.75 and capitalization was around US$40 million.

In May 1930, Catchings departed Goldman Sachs. Walter Sachs became the president of GSTC and, together with Sidney Weinberg, took on the task of liquidating the investment trust’s assets.

The consequences of the failure of GSTC were formidable, nearly causing the firm’s demise and severely damaging its reputation. In the aftermath, Sidney Weinberg was entrusted with the leadership of the firm, and for nearly four decades, he would steadily rebuild the firm’s reputation and position Goldman Sachs as a leader on Wall Street and beyond.