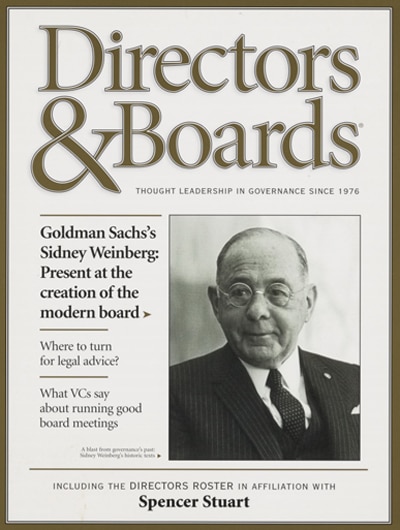 His passion for this work is reflected in the impact he made on the evolution of corporate directorships in the 20th century.

In June 1933, Sidney Weinberg wrote a memorandum to the chairmen of every corporation where he then served as a board member. The memo came on the heels of the Federal Securities and Exchange Act and significant legal opinions regarding corporate stewardship. In Weinberg’s own words, these events “served to focus public attention on the question of a director’s liability, and similarly…as to whether or not we are discharging our duties as directors in a manner in keeping with the spirit and letter of the law and in conformance with what stockholders have come to expect of directors.”

On May 31, 1949, he addressed the Harvard Business School Club of Cleveland, choosing as his topic, “The Functions of a Corporate Director.” In the speech, he stressed the themes of independence, timely disclosure of key information, and candor between a company’s senior executives and its board. He also urged directors to “do your homework.”

Immediately following the speech, Weinberg was besieged with requests for reprints of his remarks for distribution to other corporate directors and executives. The address was also adapted into an article in the Harvard Business Review, appearing in the September 1949 issue under the title, “A Corporation Director Looks at His Job.”

“I consider being a director a semi-public service,” Weinberg said, “and directors should look at it in that way or not serve.” As further proof of the prescience and enduring wisdom of Sidney Weinberg’s vision and standards for corporate directors, his remarks have been reprinted and referenced by the business press well into the 21st century.