In 2000, Goldman Sachs assists Japan’s Ministry of Finance in its US$11.3 billion offering of Nippon Telegraph and Telephone shares (NTT-6), making the firm co-lead manager of three consecutive offerings for the Japanese telecommunications giant.

In 2000, the Japanese government announced that it would sell 1.3 million shares of the country’s telecommunications company, Nippon Telegraph and Telephone (NTT). The offering was dubbed NTT-6 since it was the sixth tranche to be brought to market since NTT’s shares were first floated on the Tokyo Stock Exchange in 1987.

Japan’s Ministry of Finance selected Goldman Sachs, along with Merrill Lynch, Nikko Salomon Smith Barney and Nomura, as global managers for the issuance. These four firms had been chosen from approximately 70 that the Ministry of Finance had invited to submit applications for the transaction. 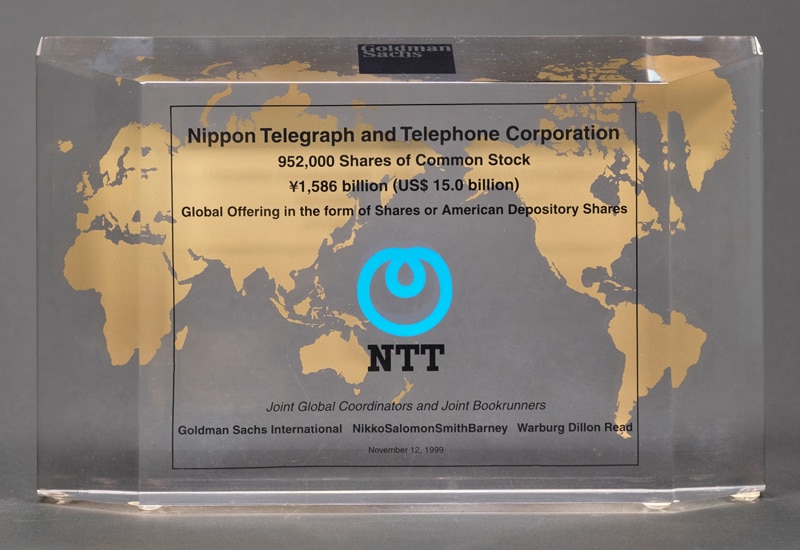 Its similar role in NTT-5 helped elevate Goldman Sachs to the rank of number one in worldwide equity underwriting in 1999. The firm had also recently held leading roles in other notable transactions in the telecommunications space, including the US$13 billion offering for Deutsche Telekom AG (1996) and the initial offering of NTT DoCoMo (1998), then the largest global IPO in history at more than US$18 billion.

Goldman Sachs had previously worked with the Ministry of Finance on NTT-4, so with NTT-6, the firm had successfully co-lead managed three consecutive offerings for the Japanese telecommunications giant. Its relationship with NTT grew and deepened over the years as NTT pursued other strategic initiatives. In 2013, Goldman Sachs served as exclusive advisor to NTT for its US$525 million acquisition of US-based cloud networking company Virtela Technology Services, Inc., which enabled NTT to expand its leadership in global network and cloud services.