Recognizing the vital role that small businesses play in creating jobs and driving innovation and economic growth, in 2010 Goldman Sachs launched 10,000 Small Businesses to provide qualified small companies a combination of education, mentoring, and access to capital. Following the initial success of the program, a sister program, 10,000 Small Businesses UK was later piloted in 2010 to further boost economic growth.

In the United Kingdom, small businesses represent a staggering 99 percent of all businesses and employ more than 60 percent of the workforce. Since its inception, 10,000 Small Businesses UK has engaged over 1,600 of these high-growth, small business leaders who seek to grow their businesses and create local employment. Like its US equivalent, the program has eligibility criteria relating to staff size and revenues and gives preference to social enterprises and businesses operating in regeneration areas.

Working in collaboration with a coalition of leading British business schools, the program delivers practically-oriented business and management education. By bringing together leaders of small businesses from across industry sectors and every region of the United Kingdom, 10,000 Small Businesses UK also creates unique networking and peer learning opportunities for participants that extend beyond the duration of the program to include numerous alumni events. 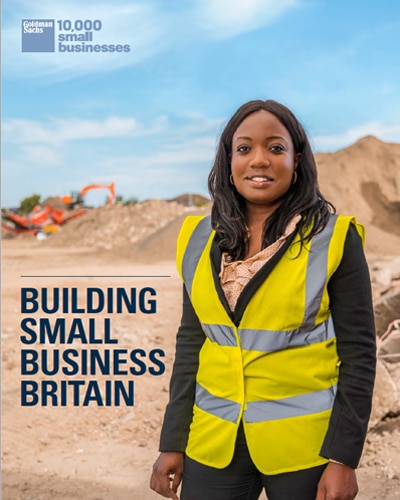 The program has had a proven impact. In 2018, 10,000 Small Businesses UK published the “Building Small Business Britain” report highlighting the incredible growth participants have experienced. Graduates are consistently doubling revenues and creating over 50 percent more jobs within two years of completing the program, contributing over GBP2.8 billion and more than 40,000 jobs to the UK economy.

Critically, the program has also had an impact on the UK’s productivity crisis. In 2019, productivity in the United Kingdom lagged behind the United States by 23 percent and the G7 by 16 percent on average. Compared with a control group of fast-growing small businesses that did not participate in the program, 10,000 Small Businesses UK graduates increased their productivity by 28 percent from 2014 to 2017.