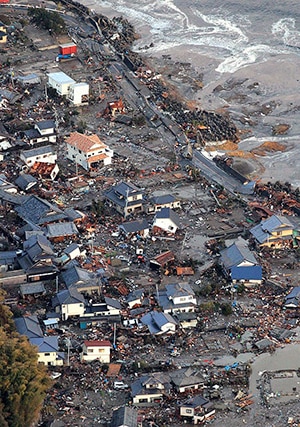 On March 11, 2011, at 2:46 pm, a magnitude 9.0 earthquake struck off the Pacific coast of Tohoku, Japan, 231 miles northeast of Tokyo. The largest earthquake in recorded history to hit the country, it moved Japan’s main island more than two meters to the east. A half hour after the earthquake, a tsunami broke over 650 kilometers of coastline, flooding land and destroying towns and villages. When 30-foot waves from the tsunami breached the 10-foot sea wall around Tokyo Electric Power Company’s Fukushima Daiichi nuclear power plant, a meltdown in three reactors triggered what would become the worst nuclear disaster since the Chernobyl accident in 1986.

The day following the earthquake and tsunami, at least 10 percent of households in Japan were without electricity. In the ensuing weeks, as the nuclear disaster at the Fukushima plant continued to unfold, thousands of people were forced to evacuate their homes. It would not be until December 16, 2011 that Japan’s then-Prime Minister Yoshihiko Noda would declare that a “cold shutdown” had finally been achieved at the plant, signifying that the plant’s reactors had stayed at below-boiling temperatures for a sustained period, reducing radioactive releases to minimal levels.

The earthquake and tsunami caused more than 15,800 deaths, with over 2,500 missing and more than 6,000 injured. More than 470,000 people were evacuated from their homes. The direct financial damage from the disaster was estimated to be JPY16.9 trillion (US$199 billion), making it one of the costliest natural catastrophes of all time.

In the immediate wake of this historic natural and humanitarian disaster, Goldman Sachs set out to determine the location and well-being of its nearly 1,000 Japan-based employees and interns to confirm their safety and offer them the use of the firm’s Employee Assistance Program. The firm’s Tokyo office handled extremely volatile conditions with many market participants absent the week following the earthquake and some of the highest volumes on record, providing equity hedging solutions to domestic insurance clients as well as foreign exchange liquidity through the Group of Seven industrialized nations (G-7) intervention. The G-7 intervention helped Japan recover by driving down the yen for its export-reliant economy. The firmwide response, including support from offices outside Japan, demonstrated the strength of Goldman Sachs’ culture of teamwork and client service through challenging personal and market conditions.

Days after the earthquake, on March 14, 2011, Goldman Sachs contributed JPY500 million (US$6.1 million) to relief efforts and provided opportunities for its people to make donations through the Japan Disaster Relief Matching Gift Program and the firm’s donor advised fund, Goldman Sachs Gives. Volunteers at all levels of the firm quickly mobilized to lend on-the-ground support through the firm’s Community TeamWorks program, participating in nearly one dozen distinct projects in the Tokyo area, from sorting and packing aid relief kits, to wrapping snacks and writing message cards to children in Tohoku. Later in the year, the firm contributed an additional JPY244 million (US$3 million) to ongoing relief efforts.

In the years that followed, the firm continued to show its support for the Tohoku region through initiatives such as the TOMODACHI Goldman Sachs Music Outreach Program, which helps local youth build confidence and leadership skills. In 2021, a decade on, Goldman Sachs provided study packs and messages of encouragement to 2,000 young people from low-income families in Tohoku. In addition, people in the firm’s Tokyo office observed a moment of silence to remember the victims of the disaster at the exact minute the earthquake had struck ten years earlier.

With their ongoing efforts supporting those in the region, the people of Goldman Sachs continue the firm’s time-honored practice of responding to disaster with ingenuity, collaboration, compassion and commitment, reinforcing that the firm’s people are indeed one of its greatest assets.