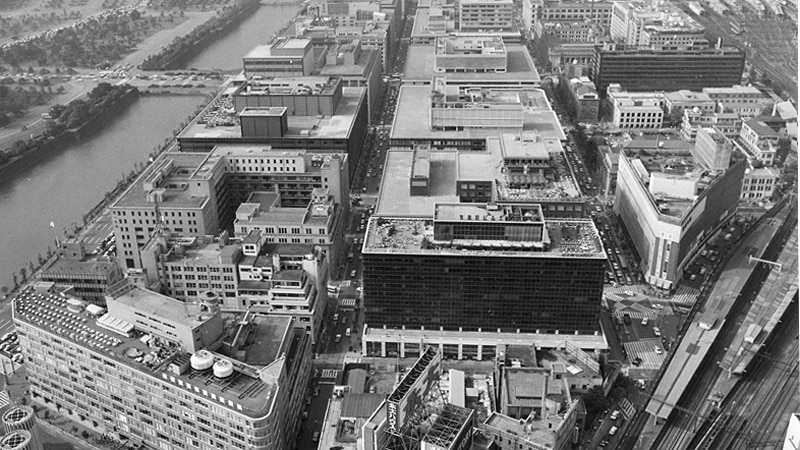 Aerial view of the Marunouchi district in Chiyoda City, Tokyo, 1972. The firm’s first office in Tokyo was in the Yurakucho Building, the black rectangular building in the center. (The Asahi Shimbun via Getty Images)

Even before Goldman Sachs had an on-the-ground presence in Japan, the firm was doing significant business there. In 1971, it was tapped to handle a commercial paper issuance in the United States on behalf of the centuries-old Japanese trading company Mitsui & Co, Ltd. Seeking to appeal to skeptical US investors, Goldman Sachs ultimately backed up the offering with a US letter of credit. The success of the offering elevated the firm’s profile in a country that was particularly difficult for foreign firms to penetrate at the time.

Goldman Sachs opened its Tokyo office – located in the Yurakucho building near the Imperial Palace in Chiyoda City – in January of 1974. It was the firm’s first office in Asia. That same year, an office was opened in Zurich, Switzerland, and these two sites – combined with the London office established four years earlier – provided Goldman Sachs with an increasingly international profile.

When announcing the Tokyo opening a few months beforehand, the firm noted that the office “… would concentrate initially on investment banking opportunities including the placement of securities in the Tokyo capital market, international financing for Japanese corporations (including financing for direct investments by Japanese companies in the United States), external financing for Asia-area governments, ship financing and related activities. The office will also be available to assist US clients in connection with their Asian activities, as appropriate.”

Growth was rapid; in fact, by 1978, Goldman Sachs was forced to move to a space in the Kasumigaseki building (also in Chiyoda City) that was double the size of its initial location – a clear indication of the growing importance of the Tokyo office not only for its access to the Japanese market but also as a gateway to broader Asian markets.

By the end of the 1970s, Japan had become the second-largest economy in the world and Tokyo was the second-largest global financial center. In 1985, Goldman Sachs joined the Tokyo Stock Exchange, and the firm was the first non-Japanese securities company permitted to open a banking subsidiary in Japan in 1991.

Marking its steadily developing global presence, over the next 40 years the firm would open offices throughout Asia in Hong Kong, Singapore, Beijing, Shanghai, Seoul, Kuala Lumpur, Jakarta and Shenzhen.