In 2011, Skype, the Internet software company, faced a crucial decision. A strong and rapidly growing business, with more than 120 million monthly users, Skype had become one of the most recognizable brands on the Web. It had been acquired in November 2009 by an investment group led by Silver Lake and, after a year of focus on operations, product development, new monetization initiatives and strategic partnerships to further accelerate growth, was ready to go public.

With the help of Goldman Sachs, Skype was actively preparing for its IPO; at the same time, however, its brand and platform had attracted significant strategic interest and within weeks of the planned IPO, Microsoft made an offer.

As a leader in technology mergers and acquisitions as well as capital markets, Goldman Sachs pivoted quickly from leading the IPO to advising on the sale. The transaction — at $8.5 billion — was one of the largest ever Internet sales — and benefited all parties involved. For Silver Lake and its investment partners, it was the realization of one of the most successful private equity investments in history. For Microsoft, it delivered Skype’s full range of mobile and desktop communications capabilities and a large and loyal community of users. For Skype, it was a major step toward achieving its vision of making the world a more connected place.

For Goldman Sachs’ technology investment banking team, 2011 was a busy year, as we advised and helped to execute many of the year’s most notable transactions. 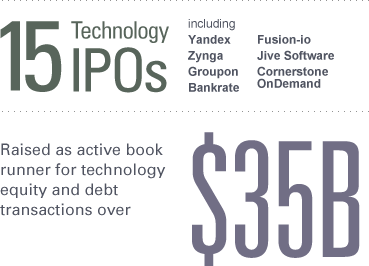