Henry Goldman leads the firm’s first IPO in 1906, utilizing the innovative strategy of earnings, rather than solely assets, to attract long-term investment in United Cigar Manufacturers.

At the beginning of the twentieth century, Henry Goldman sought to broaden the firm’s business and set his sights on underwriting stocks in the rapidly expanding railroad and utilities sectors. In an effort to gain the attention of the railroads, he began making significant buys of railroad stocks. But the insular world of investment banking made it clear that the established players in the railroads market (the houses of J. P. Morgan & Co., Kuhn, Loeb & Co., and Speyer & Co.) would fiercely defend their turf. This would spur Henry Goldman to pursue different and ultimately more lucrative opportunities.

As would often be the case throughout the firm’s history, a roadblock was met with market innovation. Closed out from the railroads, Goldman Sachs instead targeted the growing base of retail companies in need of “industrial financing.” Historically these mercantile entities had relied predominantly on bank loans and commercial paper for funding. As they sought to expand and required additional capital, Henry Goldman saw opportunity – although it was not without significant hurdles. 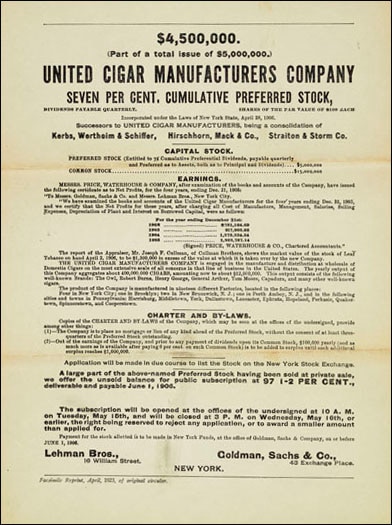 One of the challenges for retailers was that, unlike railroads and utilities, these operations had few hard assets—traditionally a key to valuation and underwriting. Henry Goldman advocated a new approach to valuation, not based simply on assets owned, but on a company’s ability to generate income, and ultimately, its earnings. This earning-based valuation was the key to the firm’s first IPO, executed on behalf of United Cigar Manufacturers, which had been formed by the merger of three cigar companies (it would later be renamed General Cigar Co.) in April 1906, and operated 19 factories in New York, New Jersey and Pennsylvania.

As he targeted new opportunities in underwriting, Henry Goldman teamed up with his good friend Philip Lehman of Lehman Brothers. The two bankers lunched together regularly and had even contemplated creating a new joint company, but decided instead to pursue together new opportunities in underwriting. Goldman Sachs had the strong customer base required, while Lehman Brothers provided significant available capital. They agreed to a 50/50 split of all proceeds, an arrangement that would last nearly two decades and see the successful co-management of 114 offerings for 56 issuers from 1906 to 1924, including clothing manufacturers, cigar manufacturers, and department stores.

Lehman Brothers and Goldman, Sachs & Co. opened their books on April 17, 1906, one day before a devastating earthquake shook San Francisco. The United Cigar IPO raised US$4.5 million dollars, equivalent to US$2.9 billion in 2018. The use of price-earnings ratio as a key metric would become common industry practice. In the near term, it was essential to the firm’s long line of successful offerings in the early 20th century for companies that also lacked significant hard assets on their balance sheet. Such companies, which derived their value from strong earnings and goodwill, included Sears, Roebuck & Co. and F. W. Woolworth Co.