With Merck & Co. Offering, Goldman Sachs Emerges from the Shadow of World War I

In the aftermath of World War I, Goldman Sachs forges a relationship with pharmaceutical manufacturer Merck & Co.— one that thrives well into the twenty-first century.

The First World War had left Goldman Sachs deeply shaken, disrupting its business and prompting the sudden departure of its senior partner, Henry Goldman. Taking place amidst the upheaval and uncertainty of the postwar era, the IPO of pharmaceutical company Merck & Co. helped restore stability to the firm and lay the groundwork for a relationship that would flourish in the century to come. 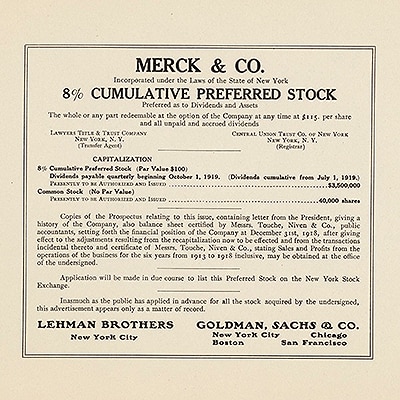 Goldman Sachs and Merck & Co. had much in common: both were closely held family partnerships with humble origins whose deep ties to Germany became problematic during the war. Merck had been founded in Darmstadt, Germany in 1668 when Friedrich Jacob Merck purchased an apothecary shop (the predecessor to the modern pharmacy) next to a castle moat. Under the management of later generations of the Merck family, the shop was transformed into E. Merck AG, a drug manufacturer specializing in early painkillers such as codeine and morphine and catering to a global clientele. Along the way, Merck solidified its position as an industry leader, establishing early quality control standards and publishing the first edition of The Merck Manual of Diagnosis and Therapy—the latest editions of which continue to be among the world’s most widely consulted sources of medical information. In 1891, a subsidiary, Merck & Co., was established to market the company’s products in the United States; just over a decade later, it opened a large manufacturing plant on a 150-acre site in northern New Jersey, just outside New York City.

With the entry of the United States into World War I in 1917, however, Merck & Co., like Goldman Sachs, fell under the shadow of anti-German sentiment. Acting quickly, the firm’s American executive, George Merck, preemptively transferred all company stock belonging to its German parent company to the federal government as a gesture of goodwill. In 1919, the government allowed the stock to revert back to Merck & Co., which the company—in partnership with Goldman Sachs and Lehman Brothers—made available for sale to the public in an offering worth US$3.5 million (US$40 million in 2021 dollars). As one of Goldman Sachs’ first significant transactions in the aftermath of the war, it helped return the firm’s underwritings business to a stable footing following years of turmoil.

In the century that followed, Goldman Sachs worked repeatedly with Merck & Co. as it grew from a newly independent entity into one of the world’s largest pharmaceutical companies. During a period of critical expansion in the 1940s and 1950s, Goldman Sachs helped the company raise additional capital through a series of secondary share issues, which it marketed as “an unusually desirable long term investment holding.” This faith was well placed, as Merck went on to produce some of the twentieth century’s most impactful medicines and vaccines, which have proved invaluable in the fight against such diseases and medical conditions as asthma, hypertension, pneumonia, human papilloma virus, hepatitis B, diabetes, HIV and Ebola. In 2009, Goldman Sachs acted as lead advisor to Schering-Plough Corp. in its acquisition by Merck, a $46 billion (US$57.3 billion in 2021 dollars) transaction that resulted in Merck becoming the second-largest pharmaceutical company in the world at the time.