The firm opens an office in Zurich in 1974, its second in Europe. 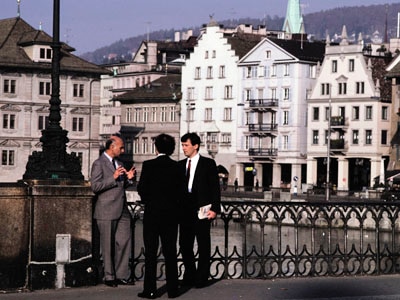 Switzerland’s strength as an international financial hub dates from the beginning of World War I and its disastrous economic and political aftermath. In the interwar years, the country’s neutrality, coupled with its political, fiscal and monetary stability and banking secrecy, cemented the Swiss Federation’s reputation as a safe haven for finance. The Bank of International Settlements, the bank for central banks, established a headquarters in Basel in 1930. During and after World War II, the Swiss franc became one of the strongest reserve currencies in the world by virtue of its full convertibility with the US dollar.

In the 1970s, Switzerland was considered to be the third most important financial center in the world after New York and London. Goldman Sachs opened an office in Zurich in September 1974, and by 1979 the firm provided 24-hour a day worldwide services in the Eurobond markets through its offices in London, Zurich and New York. The same year that it opened the Zurich office, Goldman Sachs established its first office in Asia, in Tokyo.

In the early 1980s, with the establishment of Goldman Sachs Finance AG, the firm began underwriting and trading Swiss-franc-denominated securities and providing financings via the Swiss franc/US dollar swap market. 1992 marked the formation of the Goldman Sachs Bank AG, a full private bank providing Swiss banking, lending and asset custody services. The bank was registered with the Swiss Stock Exchange in 1994.